Registered voters who are serviced by Anderson County Fire and Safety can go to the polls next Tuesday (May 18) to vote on a referendum that will provide additional funding for the county’s thirty one fire departments, which serve a total of twenty seven districts. If approved, the referendum will increase the millage for the county controlled fire departments by four mills.

The Anderson County Fire Commission, which administers the revenues generated by the current six mill levy, and the 31 fire departments is represents, is seeking support for the four mill increase. The current millage provides revenues to support an annual budget of some $3.3 million. The additional millage, if approved, would result in approximately $2.4 million in additional revenues over the next four years.

The levy has not been increased by the General Assembly since the Fire Commission was established in 1987. With more than nine hundred volunteers, making it one of the nation’s largest volunteer systems, 27 fire districts and 31 fire stations to support, funding is a constant challenge.

The County Fire Commission is appointed by the county’s legislative delegation. Anderson County Council does not appoint the Fire Commission and has no oversight authority over them.

Anderson County Legislative Delegation Chairman West Cox recently explained that Act 388, the tax reform measure that impacts the allowed size of a tax increase in any given year, limits the increase that can be made. “Our best estimate is that the commission, assuming the millage increase is approved, will receive approximately .9 mills the first year, with subsequent allocations in the following years. So it will take several years to realize the full increase in funding,” said Cox.

Assistant County Fire Chief Brian Moon says that time span may be as long as fifteen years, especially with the restrictions on tax increases imposed by Act 388. “This will, by no means, be a windfall. The millage for the fire department has not been increased since 1986,” said Moon. “What other agency do you know that still operates on the revenue they had thirty five years ago?”

The increase, if approved, would eventually result in a sixteen dollar increase on a one hundred thousand dollar home. Assistant Chief Moon touted the fact that the funds would be used to replace older equipment, improve training and generally upgrade the system. He also pointed out that there are frequent complaints about the salaried employees at the ACFD. “I think people get the idea that those folks are just paper pushers, or administrative. They are dispatchers, mechanics , investigators and other active support team members. They are on call 24/7 and respond to callouts just like firefighters. I think they are mistakenly and unfairly seen as less valuable than they are.”

The residents of towns or cities that have their own paid, municipal fire departments, such as Williamston, Belton and Honea Path, are neither subject to the proposed millage increase, nor eligible to vote on it. Registered voters who are eligible to vote in the upcoming May 18 Fire Commission Tax Levy Referendum are limited to those that are serviced by the Anderson County Fire and Safety.

“Even though this is listed as a countywide election, voters that are in these districts are not qualified to vote in this election. It is important that citizens understand this fact to avoid unwanted stress on Election Day,” said, Katy Smith, Director. “It is somewhat confusing for citizens to understand if they should be voting in this election. We encourage them to call us now to verify.”  A detail listing of precincts and polling locations will be posted on the county website.

Registered voters who need to vote absentee in-person for the May 18 Fire Commission Tax Levy Referendum and will have an opportunity on Saturday, May 15 from 9 .am. – 12:00 p.m. 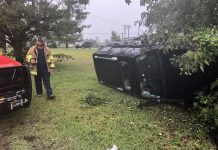