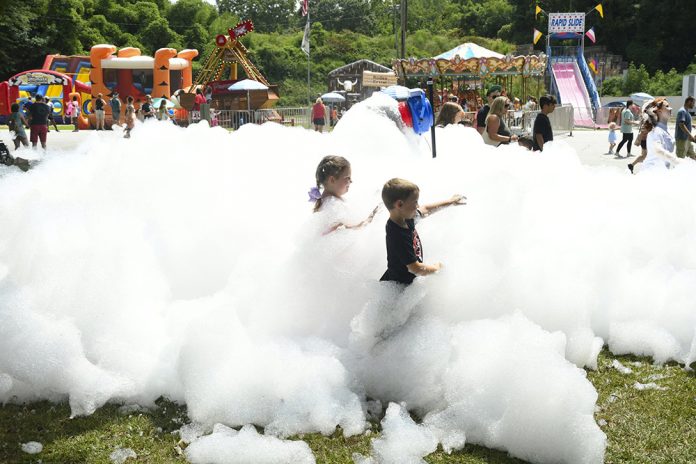 “Williamston’s 40th annual Spring Water Festival was a success”. That is what festival chairman David Meade said about the 2021 festival.
“This was our 40th year. It was a milestone. Overall we had a great turnout. The entire festival had a steady crowd throughout the day on Saturday. Food vendors had a good day, with almost every one selling out and craft vendors did very well.”
“It looks like our receipts from rides, food sales and souvenirs will be very close to what we normally see,” Meade said.
Meade said live entertainment was some of the best the festival has had.
Meade estimated the crowd for this year’s festival, at around 6000.

Craft Coordinator Beth Watkins said there were a lot of people in the craft area throughout the day on Saturday and that her craft vendors had a really good festival. The festival had about 35 craft vendors.
Williamston Mayor Rockey Burgess said, “There was a lot of fun to be had all. There was something for everybody there. My family was there both days and had an excellent time.”

Burgess said he was pleased with the turnout for the town’s signature premier festival. “If we had not had to deal with the Delta variant (of COVID) we would have had a better turn out,” he said.
Williamston Fire Chief David Huff said the festival car show had 145 entries and gave rides on the historic 1936 fire engine to 390 kids.
The dunking booth at the fire department also brought in funds for the fire department. For a donation, anyone could take a shot at putting several well know personalities into the water. Among those in the booth were Senator Mike Gambrell, West Pelzer Mayor Blake Sanders, Williamston Mayor Rockey Burgess, Susan Newborn of Childcare Director at Williamston First Baptist, Lion’s Club President Rick Owings, Palmetto High Principal Robbie Roach and Fire Chief David Huff. House Dist. 10 Representative Anne Thayer matched what was brought in by Sen. Gambrell as did a number of other companies including Bee Clean Pressure Wash of Williamston, who matched the funds raised by Principal Roach.
In the car show, winner of the Will Drake Memorial award was David Bowers of Simpsonville with his 1965 Ford F100 (with cannon).
Winner of the new Chief Steve Ellison Memorial award was Myron Norton of Belton with his 1959 Mack B42 truck. Ellison’s family members chose the winner.
This Spring Water Festival was also dedicated to Chief Ellison, who passed away earlier this year.
“Overall I think it was a great turnout under the circumstances,” Williamston Fire Chief David Huff said. Huff said with COVID, “People who wanted to come out did and social distanced and others may have chose to staff home. I feel like it went very well.”