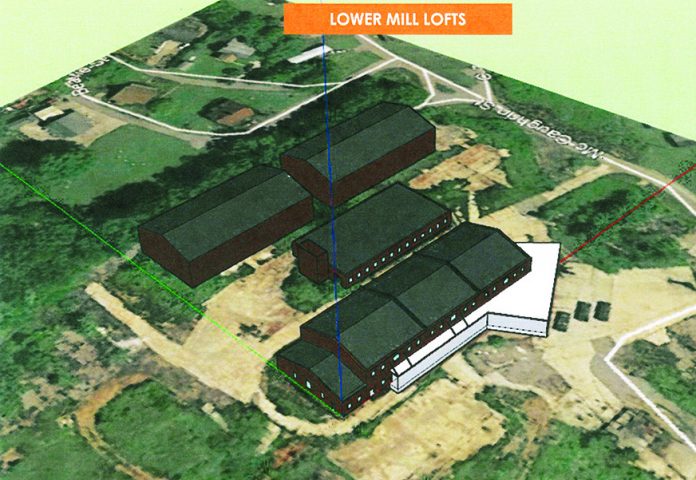 Members of the Pelzer Heritage Commission (PHC) were joined by local and county officials and others recently for a long awaited announcement on development plans for the Pelzer Mill properties.

The announcement, held Sept. 23 at the Pelzer Auditorium, is being called “a game changer” for the Town of Pelzer and surrounding area.

Larry Coker, vice-president of the PHC, said, “This has been a long time coming, but the big day is here, and the future of Pelzer is about to change.”

Redevelopment plans include nine new cottages on the banks of the Saluda River, an apartment community for 55 and older on the upper mill property, loft style apartments and two new apartment buildings at the lower mill property and a new restaurant concept in the building that once housed the Pelzer Mill offices.

The Upper Mill Apartment Village will be developed by Cadence Development, LLC (managing partner Tonya Haddock) and will include eighty rental units for residents over fifty five years of age. The facility will also include a thirty five hundred square foot senior citizens’ activity center. There will also be modern, innovative and community oriented amenities, including extensive green space.
“Residents can access amenities to encourage health and wellness, educate minds, and enrich their culture and life, all affordably within the beautiful historic Upper Mill textile site,” Haddock said.
“We will preserve and rehabilitate what remains of the former Upper Mill, while adding new construction apartment that are designed to blend into their historic surroundings.” Construction is expected to begin in spring of 2022 with a grand opening in spring of 2023. Cadence Development will partner with Rehab Builders, Inc on development of loft style apartments at the Lower Mill site. The remaining building will be incorporated and two new buildings will be constructed to house a total of 95 rental apartments. The new construction buildings will be designed with the historic nature of the site in mind and will the apartments will be “unlike any other housing in the area, and unprecedented to those who call Pelzer home,” said Ed Lipsky of Rehab Builders. ” We are honored to be a part of Pelzer’s vision for the future.”
The project is also slated to begin spring of 2022, with completion in spring of 2023

Coker says that there is also ten to twelve acres still available at that site; a tract he hopes will eventually house commercial and retail enterprises. “I think that would help create more businesses and jobs in the town and surrounding community.” Developer Chris Hill, of Craftwell Homes, announced that he plans to build the Pelzer River Cottages, nine single family homes along the Saluda that will be called the Pelzer River Cottages.
The cottages will be built near the Pelzer Overlook on the old dump site. They will be up over the river with beautiful views,” Hill said. The homes will fit a variety of family needs. The cottages will be marketed to younger people in their 20s – 30s, “working people” such as teachers and emergency services, and will reflect the town’s textile heritage in terms of architecture. The back of the property will be reserved for future trails. Construction on the cottages should begin in the next four months.

Other riverside property will also be preserved for future use by the town for such things as walking trails.

The announcement also included a new business, an innovative restaurant, Daleview Biscuits and Beer.
Kisha Edwards-Gandsy and Christopher Gandy announced plans to locate the business in the old mill office building off of Lebby Street. They plan to offer a full restaurant and brewery with “good food and good vibrations” according to Gandy.
Kisha grew up in Pelzer and eventually moved to New York. The business will pay homage to her mother who was a Gerber employee and “picked up her paycheck” in the office building. She was also a biscuit maker. “I am so grateful for the people, the soldiers for this community, who worked to make this happen,” she said. Chris operates the original Daleview Biscuits and Beer location in New York City. It is the only Black owned brewery in New York that brew its beer on site. Chris’s grandmother was also a biscuit maker and another inspiration for the unique restaurant and brewery.
The Pelzer Heritage Commission was organized in 2010 by a group of “people who grew up here” Coker said. They sponsored several “low budget” events including a Pelzer reunion, festival and worked to preserve the history of Pelzer through T-shirt sales and books.

Among the Commission’s achievements are, to date, the clean-up of the old Pelzer Mill office building, restoration of the Lower Mill flag pole, preservation of the town’s historic cemeteries, and the establishment of Overlook Park on the Saluda River.
Instrumental in the leadership and direction of the of the PHC were two of the founding members Dianne Lollis and Larry Coker.

Lollis currently serves as the organization’s President, while Coker is Vice President. Both grew up in the original mill village.
“What a great day in Pelzer,” Lollis said. She recognized Coker for his work with the PHC and thanked others including Anderson County, County Council representative Cindy Wilson, Rep. Anne Thayer and Sen. Mike Gambrell for their support though the years.
“The happiest days of my life were in Pelzer,” she said. “It means a lot to me, the things that are happening.”

The Pelzer Heritage Commission acquired the upper and lower mill properties in 2013.
Acting as a tax exempt caretaker organization, the PHC with Anderson County, which supported their efforts to clean up the old mill properties, as well as helping the commission acquire funds for the operations. With the help of Gail Jeter (Cardno) Brownfield funds were obtained from the EPA and DHEC, using the PHC as a caretaker organization to obtain and administer the funds.

Pelzer Mayor Will Ragland said, “This is a game changer and will transform Pelzer. We have not seen this type investment at this scale since the 1890s.”
Ragland said Pelzer’s citizens are “very excited and will embrace the development.”
“Pelzer has lost so much over the years. Now it’s time to bounce back. I look forward to welcoming new people that will be coming to Pelzer and are very excited about the future population change.”
“There is a lot of opportunity, not just growing but well though out growth,” Ragland said about the announcements.
“It is just enough for us to handle. We look forward to welcoming our new neighbors.”
Ragland said the town is also working on an additional economic development project encompassing more than 90 acres currently owned by the town known as the “lagoon property”.