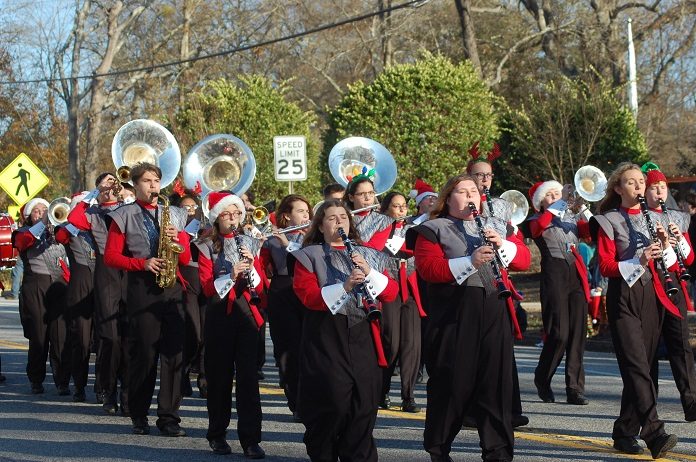 Update – Due to the high probability of rain as well as the potential for lightning, the Williamston Christmas parade has been rescheduled for Sunday, Dec. 12 at 4:30 P.M. Registration will begin at 4:00 P.M. at the old Fort Hill Natural Gas building on Hamilton Street.

The Piedmont Christmas Parade scheduled for Saturday morning was canceled due to the weather and will not be rescheduled, organizers said.

In Williamston, the theme will be “Keep Christ in Christmas”.
The parade will begin at the traffic light at Hamilton St. and Greenville Dr. and will end at Calvary Baptist Church. There is no fee to enter the annual parade, but all entrants are encouraged to bring plenty of candy. Candy should be handed out by a walking crew, not thrown, organizers said.
Performances for judging are limited to one minute in front of Town Hall.
Registration forms are available at the Williamston Municipal Center or participants can call Town Hall at 847-7473 or Cole at 864-847-5501 or 864-353-2893 for information or registration. Registration forms are also available on the town website and facebook page.
Registration will also be held day of parade at the lineup which will be held at Fort Hill Gas offices at 701 N. Hamilton St. between 2:15 p.m. and 2:45 p.m.
Sherrie Cole is the parade organizer. Registration will be held in advance by submitting an entry form to the Town of Williamston at PO Box 70, by FAX to 864-847-5910 or email to sherricole@charter.net.

The Piedmont Christmas Parade is scheduled for Saturday at 11am.
There is still time to sign if you wish to be a part of the parade. Santa will be appearing at the end of the parade and will be at the Piedmont Community Building immediately following for pictures! The parade is organized by the Bonnes Amies Club.

Entry forms are available at the Piedmont Fire Department, Facebook @ bonnesamies club or by contacting one of the following Bonnes Amies Members: