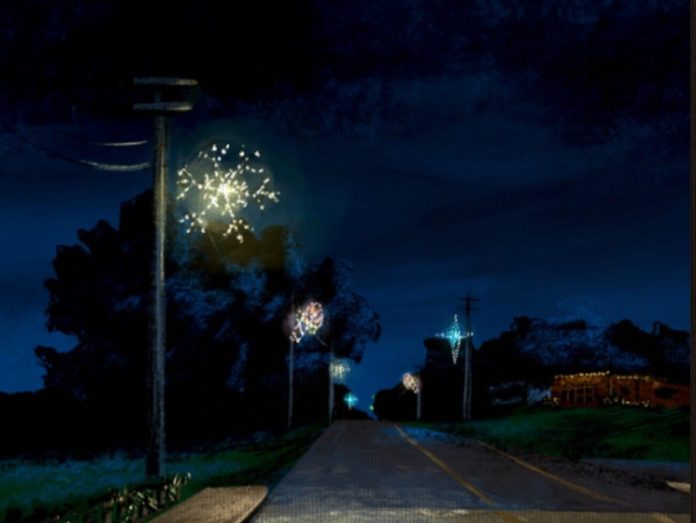 During their meeting Monday, the Piedmont Public Service District (PPSD) Board of Commissioners heard a presentation from the Piedmont Village Christmas Lights (PVCL), a new organization of local citizens who are working to make sure Piedmont has Christmas lights during the Holiday Season.

According to Rogers, Duke Energy requires these lighted pole decorations be put up by a government entity. PVCL will provide funding to purchase the decoration, have them put up and pay the electricity bill.
Rogers said they have contacted local businesses and a number of citizens are volunteering to help provide funding for the project.

Chuck Davis explained that in the past there were breaker boxes with a meter and a string of decorations. The new system is to have a box with a ground fault receptacle, which is wired to power lines. The decorations are then plugged into the receptacle. Each of the lights will have a photo cell light sensor. Cost for a box is $105.
Instead of a meter, Duke Energy will look at the power requirements of each decoration and the number of decorations to determine a set amount to charge for the power that will be used.
Davis said the power bill will be the same amount each year unless additional lights are added.

Rogers said since organizing in January, the Piedmont Village Christmas Lights committee has 12 to 15 people participating.
The Piedmont Village Christmas Lights project is being spearheaded by Edith West, who had a prior commitment and was unable to attend the meeting Monday.
Rogers said they have looked into the requirements of having power and lights, prices and shipping. They set a goal of having 20 lights to order by the Mar. 31 deadline and have received enough money to pay for 32 with another 20 promised.
Rogers said they will be talking with an electrician and looking into installation of the lighted pole decorations.
According to Rogers, Anderson County Council District 6 representative Jimmy Davis has committed $1500 from Anderson County toward the project.
Rogers said they plan to begin at the bridge, which is decorated each year by the Bonnes Amies club and branch out along Hwy. 86 and into downtown.
There are three different decorations to choose from, a Candy Cane with a bow, Snowflake and Star of David. Cost for a decoration is $550.
Most of the donations they have received so far have been from individuals and some businesses.

Rogers said Duke Energy requires lighted pole decorations to be installed through a government entity which is why the PVCL is requesting an agreement with the Piedmont Public Service District. The lights will be under the jurisdiction of the PPSD.
Rogers said the PVCL will pay for the lights, installation and power bills and the Piedmont Public Service District will not have any expense related to the project.

The lighted decorations are in Phase 1 of the project. Phase 2 will include raising money for supplies and a large Christmas Tree which will cost $6500, Rogers said.
There will be a meeting Monday, March 28 at the Piedmont Wesleyan Church at 6:30 p.m. for anyone interested in being a part of the Piedmont Village Christmas Lights.

Any business, church or individual who would like to contribute donations of any amount toward the Christmas lighting project, or purchase a pole decoration is welcome to do so, she said.
Rogers said the group is also planning along with area churches a Spring Day of Hope on April 30th and a Christmas in July event sometime around July 4th.
A bike and car show is being planned for October to help raise money for the lighting projects.
Piedmont Methodist Church has offered a house they own located on Hwy. 86 for storage of the decorations.

Fire Chief Tracy Wallace told the board of commissioners, “We have done this years ago. I think it is a do-able project. The fire department may be able to purchase a decoration, he said.
The Board unanimously approved the agreement, tentative upon acceptance by their attorney.
Commissioner Charlene Spelts also requested the PPSD purchase three decorations at a total cost of $1650. The request was approved by the board.

Commissioner Al McAbee reported the district purchased 338 gallons of diesel fuel and 112 gallon of gas for February. Year to date, they have used 893 total gallons of fuel.
McAbee reported there were 4 structure fires, 33 EMS, 5 service calls, 6 intent, 3 false alarms for a total of 51 calls.
Chairman Ed Poore Jr. reported finances were in good shape with Greenville County and Anderson County tax payments coming in.
Commissioner Rudy Rhodes reported the district had received a PARD grant with the help of SC House Dist. 10 Representative West Cox. The grant will be used for bulbs and additional lights for the ballfield at Tom Pack Park.