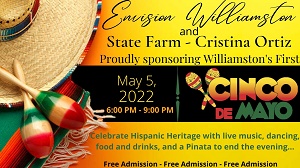 Envision Williamston and a new business that is opening soon, Christina Ortiz State Farm Insurance, will host a Cinco de Mayo event in Mineral Spring Park this Thursday, May 5 from 6 pm to 9 pm.

The event will include rides, food, drink, a band and a pinata, according to Envision Williamston Executive Director Roberta Hamby.
Cinco de Mayo is a holiday that celebrates the date of the Mexican army’s May 5, 1862 victory over France at the Battle of Puebla during the Franco-Mexican War. The day is also known as Battle of Puebla Day. While it is a relatively minor holiday in Mexico, in the United States, Cinco de Mayo has evolved into a commemoration of Mexican culture and heritage.

Envision Williamston and the Williamston Police Department will also host a Jazz in June event in the park from 6:30 to 8:30 pm on June 9. Jaime Wright will perform.