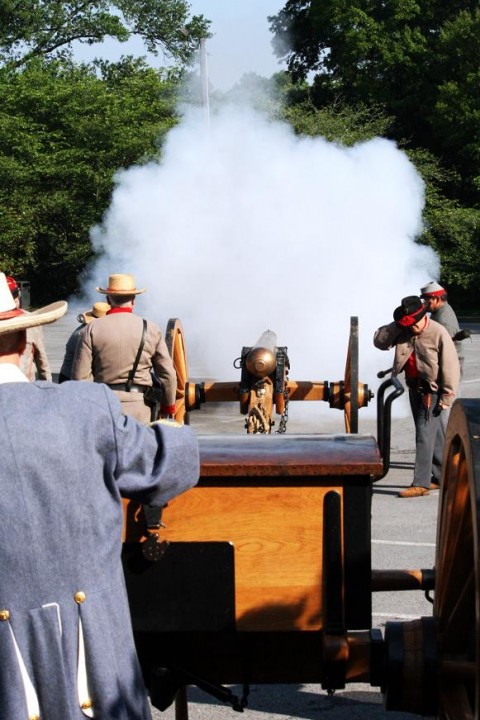 Williamston’s Historic Canon, “Miss Annie Lee” was a key attraction in an event celebrating the 150th Anniversary of the Noble Cannon, one of the most significant Civil War weapons to emerge from Georgia. The authentic brass Noble Cannon produced in Rome, Georgia presented four firings Thursday during a homecoming celebration in its birthplace of Rome.

The Macbeth Light Artillery of South Carolina and the Cherokee Artillery of Rome, Georgia presented the firings and a historical lesson about the weapon’s use during the war. The event took place in the parking lot of the Rome – Floyd Visitor Center in downtown Rome.

“Miss Annie Lee” is one of approximately 70 cannons forged during the Civil War at the Noble Foundry on the Etowah River in downtown Rome.

Although the lathe that the cannon was forged on was once located in downtown Rome, it has since been moved to a display area in the visitor center parking lot. Attendees saw a rare site – an authentic Noble Cannon and the exact lathe that forged it just feet apart.

The specific cannon returning to Rome is named Miss Annie Lee after Robert E. Lee’s daughter who died in October of 1862 as the cannon was being forged. The cannon was named by the MacBeth Light Artillery while owned by the town of Williamston, South Carolina. While records are obscure, experts believe the gun was never used in actual battle, but was shipped to Augusta, Georgia for protection of that city.

Following the 7:00pm firing, a mini concert was provided by the 8th Regiment Band, a reenactment band from Rome wearing period dress and playing authentic Confederate instruments and music under the direction of John Carruth. A guest of honor, Robert Noble, will also present words. He is a direct descendent of the brothers that founded the Noble Foundry.

The event was sponsored by the Greater Rome Convention & Visitors Bureau and hosted by the City of Rome in honor of the commemoration of the 150th Anniversary of the Civil War.

Rome, Georgia is a suburban community of 96,000 and is located in the center of the triangle formed by Atlanta, Ga., Chattanooga, Tenn. and Birmingham, Ala.