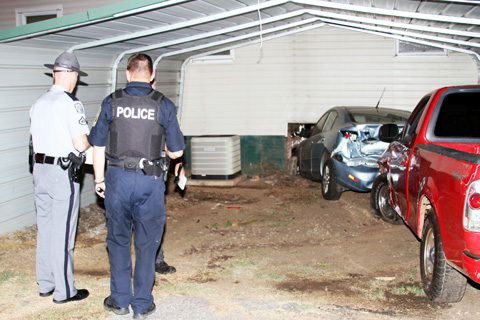 SC State Trooper Adam Warren talks with other law enforcement personnel at the scene of a accident early Sunday morning. A pickup truck that was trying to elude Williamston police officers crashed through a picket fence before striking a parked vehicle pushing it into a home on Courtney Street in Pelzer. The driver of the truck was taken by Pelzer EMS to Greenville Memorial Hospital. West Pelzer firefighters also responded to the scene. (Photo by David Rogers)

A Pelzer man who chose to flee when a state constable attempted to stop him in reference to a suspected drug purchase was taken into custody following a brief high speed chase. The chase ended in Pelzer with the driver striking a car parked in a driveway and slamming it into the foundation of the house.

Stephen Smith, WM, 47, 5’11″, 180 pounds, brn/grn, of 589 Hwy. 8 in Pelzer, was observed turning onto East Carolina St. by state constable J.H. Smith. Constable Smith observed the truck stop in the roadway while a slender black male with dreadlocks approached the vehicle and stuck his hand inside.

As the police car moved slowly down East Carolina St. the truck accelerated and fled. During the subsequent chase, over several city streets, the driver was seen to ignore stop signs and cross the center line more than once. Finally catching the vehicle at the intersection of Tripp St. and Greenville Dr. Constable Smith attempted a traffic stop, but the driver turned onto Greenville Drive and then onto Courtney St..

He then tried to turn onto Adger St. and lost control of the truck, which struck a fence and caromed across the street into the parked car under the carport. The driver attempted to flee on foot but was apprehended and taken into custody.

According to Constable Smith’s report of the incident, the subject admitted ingesting crack cocaine and also stated that buying the drug was his reason for being in the area where the chase began.

He was eventually charged with defective headlight, crossing the center line, failure to stop for blue lights, loitering for drug activity, and driving under suspension for DUI. The SCHP responded to investigate the accident.

Williamston Police Chief Jay Grubbs said that his department is working with the homeowner, who had taken some time off work for a recent surgery, to pursue compensation through the victim’s advocacy program.