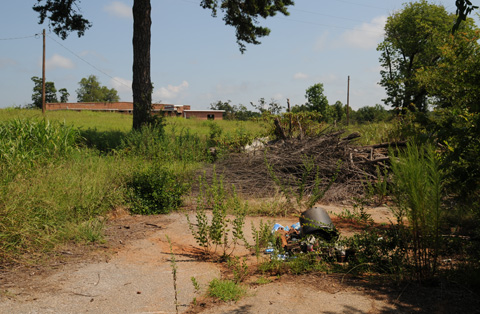 By David Meade – Officials working on a Brownsfield Assessment on the upper and lower mill sites in Pelzer said Tuesday that there were some low levels of contaminants and debris but the properties could be used for almost anything.

Gail Jeter, Brownsfield Specialist with CTC Public Benefit Corporation, who is overseeing the assessment, said with appropriate clearing and caps, the two properties should be suitable for development for most anything except single family residential.

During a meeting held at the Pelzer Community Building Tuesday, Jeter gave an final report on the assessment project which has been underway since July of 2010.

Jeter said that the Phase I site assessment had been completed and results show there are some recognized environmental conditions. The assessment included soil and water testing.

According to the reports recognized environmental conditions related to the historic use of the property included dry cleaning solvent used in the mill operations, under ground storage tanks (UST), floor drains from the mill, a coal yard, rail line and gas lines. There was also some asbestos and lead paint at both mills.

It could also be capped with a building or parking lot she said.

“Of the mills I’ve seen across the state, these are not bad,” Jeter said.

Debris at the upper mill could be a problem if building a structure, Jeter said. Debris will also have to be removed from the lower mill property if it is used at all, she said.

To help with development, both sites need an Analysis of Brownsfield Cleanup Alternatives report which will estimate the cost to get the property in shape for future use.

Jeter said they plan to fill out targeted Brownsfield Assessment applications which will be submitted for possible grant funding in the future.

“It will be in que to get funding when it is available,” she said.

“I think the town has tremendous amount of potential,” Jeter said. “There is a lot of traffic, and the proximity to Greenville. The town needs to move forward. It is doable.”

Soil and water testing at the old landfill site showed no significant problems, according to Mark Berenbrok of DHEC.

The landfill report is still in draft form and will be availalble soon, he said.