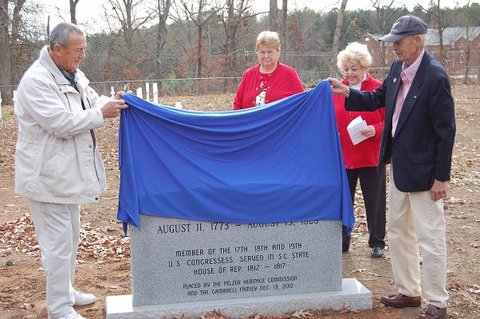 Tuesday – Pelzer Heritage Commission members Larry Coker (left), Shirley Pace and Dianne Lollis and Daryl Gambrell (right) unveil a monument placed in the Pelzer Cemetery by the commission and the Gambrell family. The marker was placed in recognition of US Congressman and SC State House member John Wilson. Wilson was a three term Congressman whose family owned the land on which Pelzer town and mills were built. He is buried in the famly graveyard. Family members of Captain Ellison Adger Smyth, a co-founder of The Pelzer Manufacturing Company, which was located on the property, were also present.