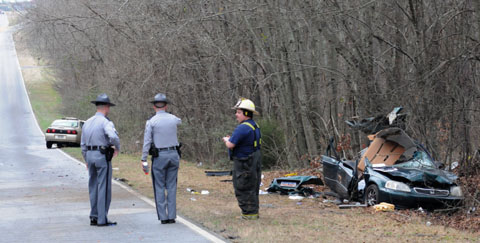 SC Highway Patrol Troopers investigated the scene of a vehicle crash on Hwy. 29 near Ballard Road Wednesday morning. The accident, involving two vehicles, happened around 7 a.m. and blocked both lanes of Hwy. 29 for more than 2 hours. West Pelzer firefighters freed two people who were entrapped in the vehicle pictured, according to West Pelzer Fire Chief David Huff. Both were transported to the hospital by Pelzer EMS. The driver of the second vehicle was uninjured. The accident remains under investigation by SC Highway Patrol investigated. Additional details were unavailable at press time.(Journal photos by Michael Lollis) The driver of this vehicle was uninjured. West Pelzer Firefighters and S.C. Highway Patrol look at one of the vehicles involved in an accident on U. S. Hwy. 29 near Ballard Rd. Wednesday morning. The accident, involving at least two vehicles, happened around 7 a.m. and blocked both lanes of Hwy. 29 for more than 2 hours. Unconfirmed reports were that no one was fatally injured. The West Pelzer Fire Department was still on the scene as of 9:15 a.m. while the Highway Patrol investigated. The wreckage was expected to be cleared and Hwy. 29 reopened around 10 a.m.