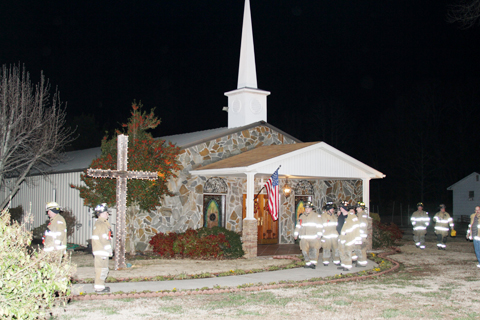 False Alarm – Powdersville and Wren Firefighters were dispatched to a Powdersville area church after someone reported a fire and a trapped person inside. There was no fire at the location.

The Greenville County Sheriff’s Office has arrested a 43-year-old Greenville man in connection with the Powdersville incident after he made a 911 call reporting that his wife was unconscious.

Deputies and EMS went to the home on Sandra Avenue just after midnight Thursday and determined the first 911 call was a fake. While they were investigating, a second call was made by the same person stating there was a fire at a Powdersville area church in Anderson County and people were trapped inside.

Investigators said they determined Ralph Roan Lawson made 38 false 911 calls, starting in July 2010. They said 21 of the calls have been made in the last three months.

Investigators said some of the calls required the response of EMS and firefighters in addition to deputies. Lawson was released on a $3,000 bond hours later. He faces up to six months in jail and up to $200 fine if convicted.