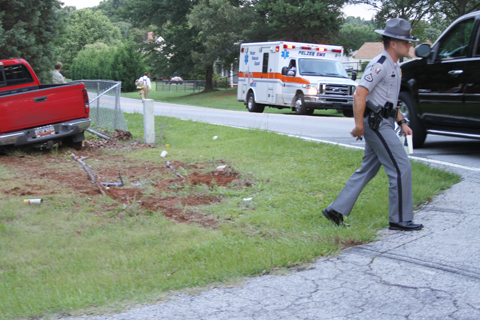 A SC State Trooper walks away from the wreckage of a pickup truck that crashed into a high pressure natural gas stand and fence Tuesday evening. The driver was driving north on I-85 near Clemson Boulevard when an Anderson County resident pulled along side the red truck to tell the driver he had a flat tire. The driver of the truck then allegedly pointed a pistol at the other driver. That driver then called 911 and followed the truck at a

safe distance. The truck then pulled to the side of the Interstate and the driver got out, removed the jack from the truck, but drove off again before changing the tire. The truck driver then continued north on I-85 at a high rate of speed and driving almost sideways according to the witness. When the truck reached the Highway 86 exit he got off the interstate and traveled toward Easley where it collided with another truck near Cool Meadows Drive and went out of control striking the natural gas stand and fence. Anderson County Sheriff John Skipper was on the scene moments after the crash as he was attempting to catch up with the truck since he was in the area. The driver was quickly apprehended by authorities. Pelzer EMS and Wren firefighters responded to the wreck. (Photo by David Rogers)