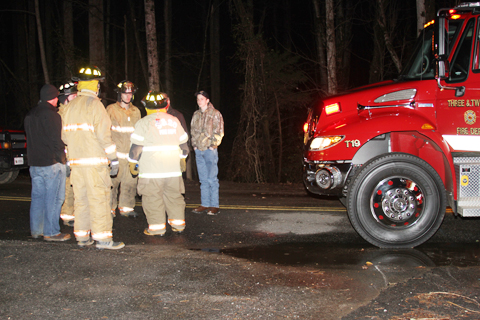 Three and Twenty firefighters responded to a call of a grass fire Thursday night on Christopher Lane. When they arrived they found a 16 year old girl inside the fire, in contact with a live electrical line. She was pronounced dead at the scene by Anderson County Coroner Greg Shore. She apparently saw the fire and went out to investigate when she came in contact with the live line according to Shore. A squirrel had apparently gnawed on the connection at the top of the pole before the line smoldered and eventually fell to the ground. Pelzer EMS also responded to the call. (Photo by David Rogers)