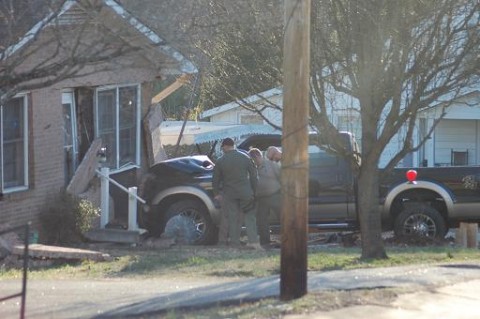 Following reports of a triple homicide shooting in Pelzer, authorities issued a BOLO for a second truck stolen by the alleged shooter. Law enforcement spotted and pursued it in a chase that went across fields, through a fence and along Hwy. 86 into Piedmont. Spike strips were placed on Hwy. 86 in front of the Piedmont shopping center where H&R block and the Piedmont library are located. The suspect fired shots at Greenville County Deputies. The strips did not stop the vehicle which continued toward Piedmont. The chase ended when the stolen truck crashed into a car and then into a house on Hwy. 86 near Hwy. 20 in Piedmont.  According to reports, the driver of the truck was pulled from the wrecked truck by numerous officers and there was a physical altercation. Jared Michael Williams of Williamston was arrested according to Anderson County Sheriff John Skipper. According to reports Williams pleaded guilty to carjacking in 2005 in Greenville County and was sentenced to 10 years in jail. He was transported by Greenville County EMS. Persons in the other vehicle which was also stuck by the stolen truck were also injured. The incident remains under investigation with officials in both Anderson and Greenville counties on both scenes. As of 6 p.m. the bodies of the three people who were fatally shot in Pelzer had not been removed from the residence on Law St. Nearby witnesses reported hearing seven shots when the incident began around 3 p.m. today (Wednesday). The Journal will update information in this incident as we get it.