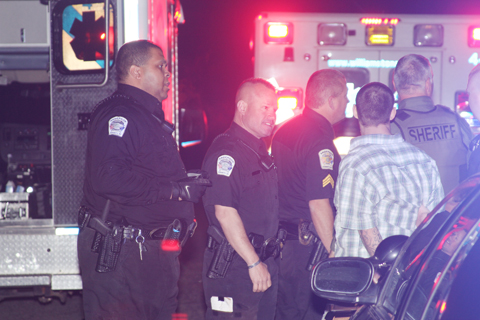 Anderson County Sheriff’s Deputies responded to a home on Bryon Circle, off Hwy. 29 North, Belton, shortly arter 6 a.m. Saturday morning to find several people arguing and one who had been shot.

According to reports, Charles Finley, 56 of Anderson suffered face and neck wounds which did not appear to be life-threatening.

Three people were ordered out of the house at gunpoint by deputies. Justin Derek Miller, 24, of Anderson was arrested and charged with attempted murder in connection with the shooting.

No charges were filed on the two other people who were in the home at the time. They were identified as Kenith Scott and Michelle Lee Kelly.

Photo – Anderson County deputies work at the scene of a shooting Saturday morning shortly after 6 a.m. The incident took place on Byron Circle off Highway 29 north, Belton. Williamston EMS responded and transported the victim to an area hospital. (Photo by David Rogers)