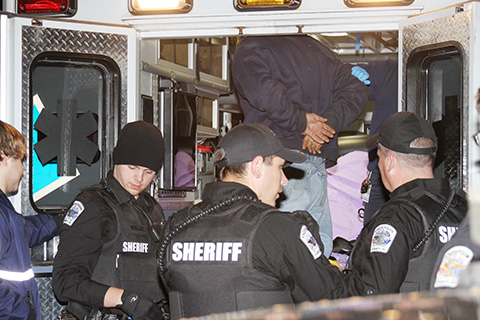 Anderson County deputies help a suspect into the back of a Williamston EMS ambulance on Sunday night. The man was allegedly driving an SUV and failed to stop for deputies when they attempted to stop the vehicle. A pursuit began and traveled into Williamston on Cherokee Road. The suspect turned onto Mattison Drive and back onto Cherokee Road. Just outside the city limits he turned onto a dirt road and drove down to the reservoir where he and two others jumped from the vehicle and fled on foot. Deputies started a search with K9 officers and located the driver in less than five minutes hiding in some underbrush. He was taken to AnMed to be checked out. (Photo by David Rogers)

According to the Anderson County Sheriff’s Department incident report, Deputies B. Surratt and K. Evatt, as well as other deputies and one reserve deputy, conducted a high speed chase of a black Ford explorer from the area of the Smith Ridge subdivision to Lockaby Road, and then on to Mattison Drive in Williamston. The vehicle reversed course on Cherokee road and turned onto a dirt road, where it eventually came to a dead end at a pond. Two white males fled the car and one, Bobby Holdbrooks, WM, 57, 5’8″, 180 pounds, brn/blue, of Pelzer, was later apprehended following a pursuit by two county K-9 officers.