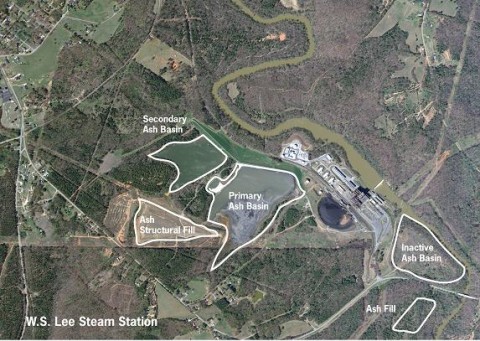 Duke Energy continued its process of involving the public in the ongoing renovation, upfitting and cleanup underway at the W.S. Lee Steam Plant by hosting a community meeting last week. Several hundred people attended the open house meeting which focused on providing information and receiving input from the public concerning the coal ash removal project that Duke, along with Waste Management, is beginning this month.

There are two active ash basins, referred to as the promary and secondary basins. The site also has an inactive ash basing consturcted in the 1950s, a structural fill and an ash fill. These ash storage area hold a total of about 3.2 million tons of coal ash.

The Lee Steam plant relied on burning coal to fire boilers to create the steam that powered the generators, creating electricity. When coal is burned, it creates multiple coal combustion products including fly ash, a fine material similar to the consistency of talcum powder, and bottom ash, which is coarser, granular material collected from the bottome of the coal fired boilers. This is what is stored in the ashbasins and fill sites.

The first phase of the project will involve the excavation and removal of approximately 1.4 million tons of coal ash. The ash, which represents approximately forty per cent of the total on site, will be removed from the inactive basin and an ash fill area. The ash will be transported in side dump dump trucks to a lined Waste Management landfill in Homer Georgia.

The project is expected to take two to three years, at a rate of 125 to 150 truck loads a day. The use of trucks was mandated by the absence of rail access to a landfill that is approved to receive coal ash.

Routes for ingress and egress have been carefully studied by traffic engineers.

A review of six possible routes over the last months has resulted in the designation of one route in and one route out have been determined. Duke has expressed its commitment to maintaining the surface roads impacted by the traffic, stating that they are working with DOT to ensure that the roads are kept in safe and good condition during the project.

Plans for the disposal of the remaining two million tons are still under study, and may include the construction of a fully lined landfill at the Lee site.

Coincidental to the ash removal project, the construction of two combined cycle natural gas fired turbines will be underway as well.

For that project, existing rail lines will be used to bring in the largest and heaviest equipment components. At the peak of construction, which is expected to occur over the course of next year, approximately five hundred workers are expected to be involved.From Duke Energy Lee Steam Plant