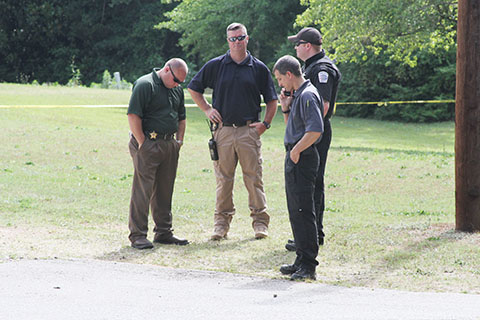 Anderson County Sheriffs Department Investigators work at the scene of a shooting Monday afternoon in Piedmont. According to reports, a man called 911 and said he had shot his nephew. Anderson County Deputy Coroner Charlie Boseman pronounced the man, Timothy Lee Owens, dead at the scene. Owens, 40, died from a gunshot wound to the upper body, according to Anderson County Deputy Coroner Charlie Boseman. An autopsy is scheduled for Tuesday morning. Owen’s uncle, who has not been indentified, was taken into custody for questioning Monday afternoon, but no charges have been filed, officials said. The fatal shooting occurred during an argument in a single wide mobile home on Chapman Street. According to Boseman, Owens lived in a mobile home next door to his uncle. Pelzer EMS also responded to the scene. (Photo by David Rogers)