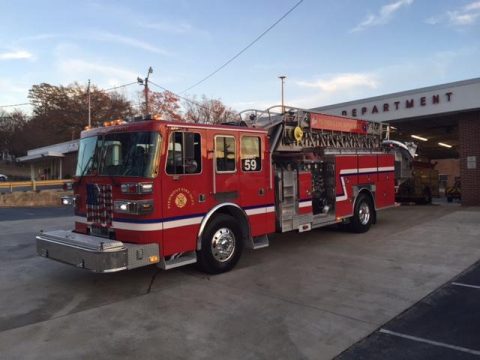 By Stan Welch
The Piedmont Fire Department is proud owner of a seventy foot ladder truck. The 1998 Sutphen Quint unit was obtained from the City of Greenville Fire Department, which removed it from service in keeping with their policy of replacing all equipment after twenty years, regardless of its condition.
The truck was obtained for ten thousand dollars and has had an additional forty thousand dollars in reconditioning and repairs done to it since.

The costs were covered by the Department’s reserve fund, established for just such a use.
“We tested the pump and the aerial platform before taking possession, and every thing was fine,” said Chief Tracy Wallace. “Most of the work was cosmetic. We had it stripped down and painted, put new rims and tires on it, and our guys re-upholstered the cab. We changed out all the lights for LED lights.”
A Quint unit includes five standard elements: a fire pump, a tank, hose, and aerial device and ground ladders. Williamston Fire Department’s recently obtained ladder unit is also a Quint unit.
Wallace said the unit,which offers both extended vertical and lateral capacities, will automatically be dispatched to all commercial structure fires, as well as to some of the larger residences that are becoming more common in the department’s response area. “As this area continues to grow, this truck will be more and more valuable as a tool to fight fires and respond to other situations as well,” said Wallace.
The area’s growth is reflected in the Department’s number of calls, with last Month bringing the total calls for the year so far to one hundred thirty, or the second highest total in the last five years. Last year at this time, they had responded to one hundred forty calls. Medical calls continue to comprise the great majority of responses.
All of the squad’s paid fire fighters have already obtained their state certifications for operating the ladder truck. The Powdersville Department will begin training on the new unit this week.