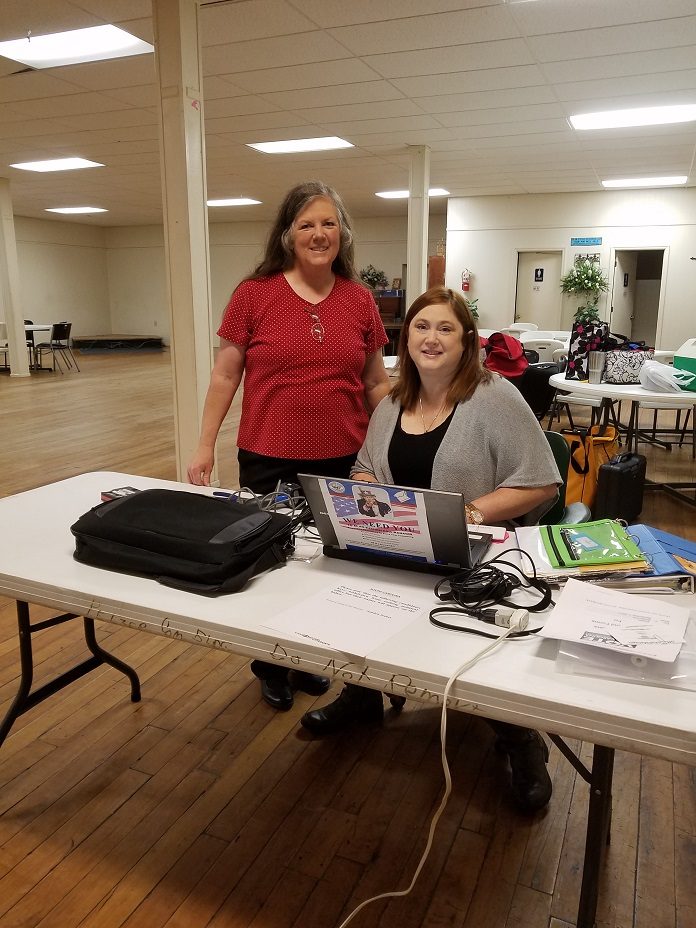 Tuesday is election day in Pelzer, West Pelzer and Honea Path. According to Anderson County Registration and Elections Director Katy Smith, all polls opened on time and there are no issues to report. “A few voters had made it to the polls to cast their votes by 7:30 a.m. We hope for a good turnout for these municipal elections,” Smith said. Pictured – Shirah Heller (Clerk) and Brenda Spratt (Poll Manager) are working the Pelzer Precinct poll at the Pelzer Community Building.

Voters are reminded that school will be in session at the West Pelzer Primary precinct and voters are encouraged to follow the signs to the designated voting areas, be observant of the traffic conditions, take extra care when entering these areas, and obey all safety and security rules that are in place.

Pelzer voters will decide on a new mayor and all four seats on council are open. Current council members Roger Scott and Kimberly Wilson are facing off for the office of mayor.
Six people, including incumbents Will Ragland and Olene Bear, are running for council. In addition to the incumbents, Gary ‘Garbo’ Pridmore, Michael Matthews, Teresa Ramsey and Eddie Waits are candidates for council. Waits is running as a write-in candidates and his name will not appear on the ballot. Candidate Sandi Jeanes has withdrawn from the election.
Both elections are non-partisan and no party affiliation will be on the ballot. In the event of a tie, any run-off will be held two weeks after the general election, on Tuesday, Nov. 21.
Anderson County Board of Elections will conduct the elections.

All three candidates in the West Pelzer Town Council race have experienced the loss of campaign signs, as have several Pelzer candidates. But the losses seem spread fairly evenly among the various candidates, and no one the Journal spoke to is alleging any sort of political shenanigans.
“I’ve had a few missing, but I haven’t really ridden around checking. I don’t think it’s too bad, and I know Mr. Jeanes and Mr. Rogers have lost a few too,” said Vicki Farmer. Farmer is running for one of the two seats held by those incumbents. Of the three candidates, the two receiving the most votes will assume the seats.

In West Pelzer, incumbents council members Jimmy Jeanes and Johnny Rogers are running for reelection while newcomer Vicki Farmer is also seeking one of the two seats on council.
Councilmen Donnie Jeanes, Jim Riddle, and Mayor Blake Sanders do not face reelection. The election will be conducted electronically by voting machine, but paper ballots will be available for absentee, fail safe and write-in votes.