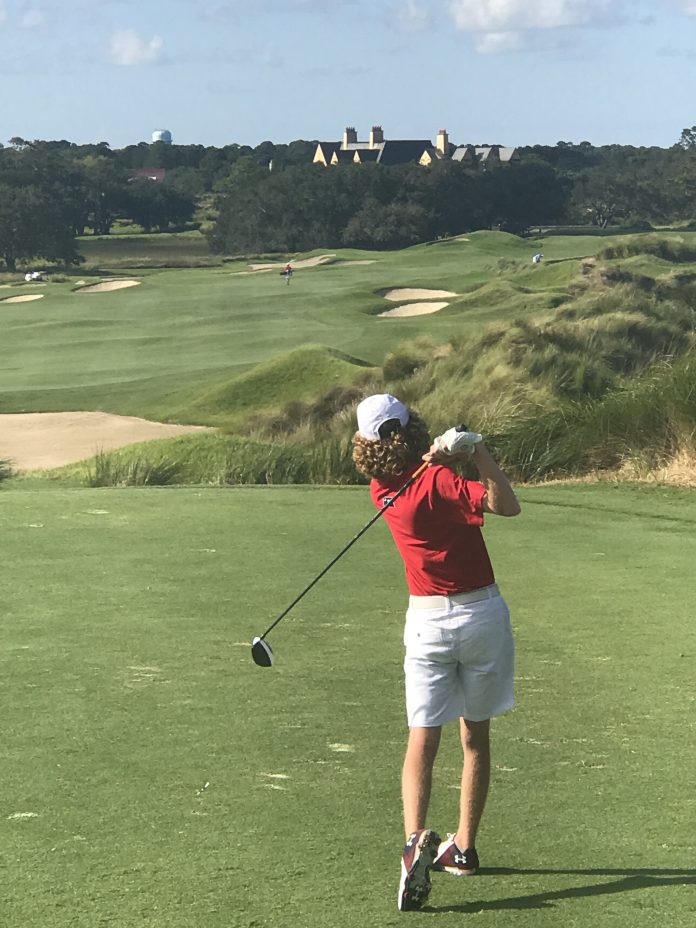 By Stan Welch
A team of amateur South Carolina golfers won the inaugural Watson Cup competition, played this past weekend at Kiawah Island. One member of that eight man team, which defeated their Scottish visitors, was Logan Hawkins, a sixteen year old golfer from Palmetto High School.
His grandparents, Susan and Butch Hawkins, spent several days at Kiawah, the site of one Ryder Cup international competition, as well as the site of the 2012 PGA championship. Susan, owner/operator of Haircroppers salon on Spearman Road, described the weekend as “absolutely magical. It was such a world class event. They treated these kids like PGA pros. Tom Watson was just so nice, so generous with these boys. We had a wonderful time, and of course, the South Carolina victory was just icing on the cake.”
The team was chosen as a result of a summer long competition. Eligible golfers played at various locations each Monday and entered their scores into a statewide system. At the end of the competition four members were chosen from the lower part of the state, through the Tommy Cuthbert All Stars, while four players from the Upstate were chosen from the Thomas D. Dodd All Stars.
Hawkins, who plays mostly out of the Saluda Valley Country Club, and who won his regional qualifying competition, was joined by Jonathan Brennan of Taylors, Daniel Brasington, of Woodruff and Zander Briggs, of Simpsonville. The lower state contingent included Rye Tifft and Nicholas Velasquez, of Mount Pleasant, and Gene Zeigler and Pake June of Florence. They are rated number one and two in the state, respectively.
The Scottish team, from the Lothian area of Scotland, underwent a similar selection process being chosen via the Order of Merit and League championships. The next Watson Cup competition will be held in Scotland. Unfortunately, many of the South Carolina players will have graduated by that time, including Logan Hawkins.
The seeds of the competition were sown several years ago when Ben Ziegler, of Florence, and Gene’s father, took him to Scotland, the birthplace of golf. He and Dave warren, captain of the Scottish team, agreed to the idea, and began to make it a reality. It now joins the Walker Cup and the Curtis Cup as the third competition between golfers from South Carolina, and Scotland. It is played under the auspices of the South Carolina Junior Golf Association.
That connection goes back almost three hundred years. The first golf club in Scotland was established in 1735 in Lothian. Four years later, the first golf clubs sent to America arrived in South Carolina; golf began to be played a year later. South Carolina became the first place golf was played in the Colonies. Watson’s involvement also has roots in the Scottish connection. Watson won eight majors during his Hall of Fame career. Five of those were British Opens, later called just The Open. That tournament has often been played on Scottish courses, including several of Watson’s victories.
South Carolina amateur golf icon Jack Lewis served as the team’s captain. Lewis was the state’s first walker Cup team member, as well as a two time Masters participant as an amateur.
Logan had several personal highlights, including scoring two and a half points on Sunday to establish a 7-5 lead for the Carolinians which the Scottish team could not overcome on Monday. He also met golf broadcaster Charlie Rhymer. Hawkins said that Logan went down his checklist thoroughly before leaving for the coast, only to find himself with only a worn, ragged golf glove on the first tee. He asked around if anyone had a glove he could use; but despite being right handed, he golfs left handed. Undeterred, he teed off and began play. He was amazed to be met by Rhymer a couple of holes into his round, and presented with a new left handed glove from the pro shop.
Members of both teams also received a putting lesson from PGA legend Dave Stockton, and met Tom Watson personally.
(See related articles on the Watson Cup and the Earl Wooten Golf Tournament written by guest sports writer Stan Olenik this week in the print or online edition of The Journal)

Pictured – Tees off at Watson Cup – Logan Hawkins, a sixteen year old golfer from Palmetto High School, was a member of an eight man team that won the inaugural Watson Cup competition in Kiawah Island over the weekend. (Courtesy photo)