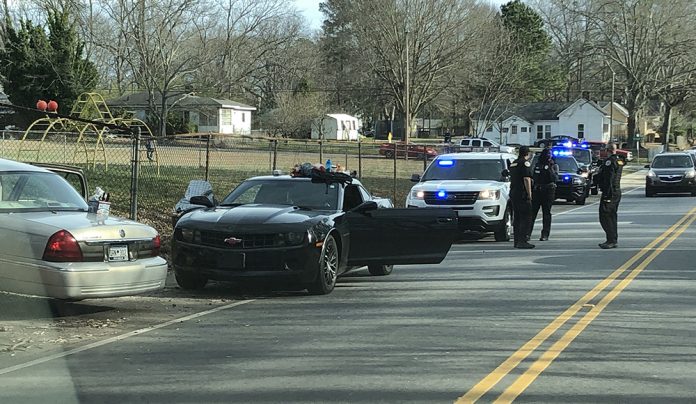 Two people have been arrested in connection with a drive by shooting involving two vehicles in Williamston Saturday.
According to Captain Keven Marcee, Williamston Police Officers responded to a shots fired call on East Carolina Street around 3 p.m. Saturday. An investigative stop was made by officers of two different vehicles on Hamilton Street subsequent to the call. Two individuals were detained and taken into custody after a discovery of guns and drugs in one of the vehicles. Thomas Dantez Hunt, 27 of Pelzer, was charged with Possession of Marijuana, Possession of Alprazolam schedule 4, Possession of Amphetamine/Dextroamphetamine Schedule 2, Possession of Vyvanse Schedule 2, and Violation of South Carolina Gun Law. A second individual Quinton Dewante Spurgeon, 25, of Williamston, was charged with an open container of alcoholic beverage. A third individual fled the vehicle stop and investigators are working toward a positive identification.
Damage occurred to an unrelated vehicle on East Carolina Street as a bullet entered the rear of the car. Investigators were called to work the scene. Two vehicles were impounded for processing and the incident remains under investigation.
The individuals charged are being held at the Anderson County Detention Center.