Investigators with the Greenville County Sheriff’s Office have arrested 63 year-old, Garrie Ernest Henderson with Arson 2nd Degree after he set fire to multiple structures on his property, including a residence, barn, and vehicle.
Deputies were called to 224 Mountain Creek Road, in Honea Path, at around 9:20 am Friday after a report of a fire. Investigators were soon called to the scene on suspicion of arson and during the course of their investigation found that Henderson purposefully set the structures on fire after becoming upset over a family dispute. There were no injuries reported as a result of the incident.
Henderson was transported to the Greenville County Detention Center where he awaits a bond hearing. 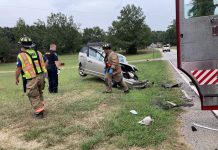