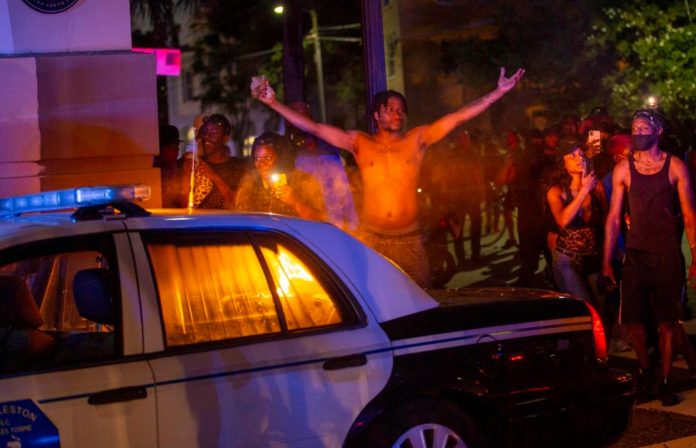 Columbia, South Carolina — United States Attorney Peter M. McCoy, Jr. has announced that six people are facing federal charges for participating in actions including arson, inciting riots, and other civil disorder in Columbia and Charleston, South Carolina, on May 30 and 31, 2020.

Following George Floyd’s death in Minnesota on May 25, 2020, protestors in Columbia and Charleston joined to peacefully demonstrate against racism and the use of excessive force by law enforcement. While the large majority of participants exercised their First Amendment rights in a lawful manner, others engaged in violent criminal acts and threatened public safety, including assaulting citizens and law enforcement officers and vandalizing and destroying public and private property.

“On May 30, 2020, violent agitators disrupted and distracted from peaceful protests in Columbia and Charleston and committed violent acts against citizens and law enforcement officers, vandalizing businesses and destroying public property,” said U.S. Attorney McCoy. “This is unacceptable and crosses a line, and this office will always stand up for law and order. We worked diligently with our federal, state, and local law enforcement partners to identify, arrest, and prosecute the individuals whose violence, vandalism, and destruction violated federal law. By escalating and inciting violence, these individuals interfered with the legitimate forms of expression and Constitutionally protected activity.”

“The FBI remains committed to safeguarding the Constitutional rights of our citizens, including the right to peacefully protest,” said Jody Norris, FBI Special Agent in Charge. “We are equally committed to investigating individuals who are inciting violence and engaged in other criminal activity. We support our state, local and federal partners in maintaining the safety of the communities we serve.”

“Over the last several months, the Bureau of Alcohol, Tobacco, Firearms and Explosives (ATF), has maintained a strong and productive relationship with our law enforcement partners, and shared the goal of quickly identifying and apprehending those that promoted violence and criminal acts during periods of peaceful protests,” said Vincent Pallozzi, ATF Special Agent in Charge. “We’ve successfully worked hand-in-hand to share resources, build cases, and bring to justice a number of violent individuals who posed a serious threat to our communities and businesses.”

In the last week, federal law enforcement authorities in the District of South Carolina have charged six individuals for crimes committed during demonstrations throughout South Carolina, including arson, inciting a riot, and civil disorders. Some of those defendants have agreed to plead guilty to the charged crimes. According to public documents filed with the federal district court, the following defendants have recently been charged with, or agreed to plead guilty to, the following federal crimes:

· Abraham Jenkins, 26, of Charleston, has agreed to plead guilty to civil disorders related to the violence and destruction on May 30, 2020.

· Kelsey Jackson, 28, of Charleston, has agreed to plead guilty to arson of a Charleston Police Department patrol car on May 30, 2020.

· Tearra Guthrie, 23, of Charleston, has agreed to plead guilty to civil disorders related to the violence and destruction on May 30, 2020.

· Orlando King, 31, of North Charleston, has agreed to plead guilty to a violation of the Anti-Riot Act related to the violence and destruction on May 30, 2020, and to being a felon in possession of a firearm stemming from an unrelated incident on April 25, 2020.

· Karlos Gibson-Brown, 24, of Columbia, has agreed to plead guilty to being a felon in possession of a firearm and ammunition for a riot-related incident on May 31, 2020.

· Marcello Woods, 28, of Columbia, has been charged with destroying a Columbia Police Department vehicle by means of fire for riot-related conduct on May 30, 2020.

Woods was arraigned in federal court Thursday, while court dates for the remaining defendants have not been scheduled. Several of the charges carry significant maximum prison sentences. For example, arson is punishable by up to 20 years in prison. Civil disorder and inciting a riot both carry a maximum possible penalty of five years imprisonment.

These cases are being investigated by the FBI, ATF, Charleston Police Department, Columbia Police Department, Richland County Sheriff’s Department, and South Carolina Law Enforcement Division (SLED). Numerous other local police departments and Solicitors’ Offices across the state have assisted in these investigations. The U.S. Attorney’s Office for the District of South Carolina continues to evaluate other cases for potential federal prosecution.

The charges in these cases are only accusations of a crime, and defendants are presumed innocent unless and until proven guilty.