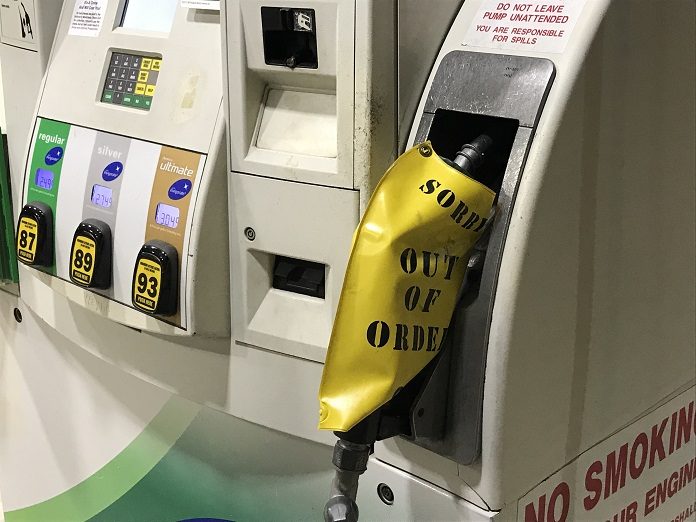 Some local gas stations were out of gas by mid morning Tuesday due to a supply shortage being created from the cyber attack on Colonial Pipeline, which supplies fuel to approximately 45 percent of the East Coast. Colonial officials were saying Tuesday that they expected the pipeline to be back online by this Friday.

Gas prices in the Carolinas have increased significantly over the last week. As the Colonial Pipeline outage threatens pump prices and possibly supply, AAA forecasts gas prices to climb even more this week in reaction to the shutdown.

“The impact of this pipeline outage will vary regionally,” said Tiffany Wright, spokesperson, AAA – The Auto Club Group in the Carolinas. “The outage will have implications on both gasoline supply and prices. The longer it is offline, the larger the impact on the east coast.”

The national gas price average jumped 6 cents on the week, to $2.96 – and if the trend continues, an increase of three more cents would make the national average the most expensive since November 2014, the last time we saw average prices at $2.99 or higher.

Over the weekend, the Colonial Pipeline announced they were the victim of a cybersecurity attack and, as a precaution, shut down the pipeline, which runs from Texas to New York Harbor. At this time, some lateral lines have reopened, but there is no word of when the mainline, including the gasoline line, will be operational.

While there is sufficient gasoline supply in the U.S. (235.8 million bbl), other pipelines and the Department of Transportation’s temporary hours-of-service exemption for tanker trucks transporting gasoline and other fuels, will be able to ease the strain, but not resolve the issues caused by the pipeline interruption. Once the pipeline is up and running, there could still be residual delays as it takes about 15–18 days for fuel to flow from Texas to New York.

AAA will continue to monitor the latest news concerning the Colonial Pipeline. In the meantime, we urge against panic-buying of gasoline. Keep these tips in mind to conserve fuel: Plan ahead to accomplish multiple errands in one trip, and whenever possible avoid high-traffic times of day.
If you own more than one car, use the most fuel-efficient model that meets the needs of any given journey.
Remove unnecessary and bulky items from your car. Minimize your use of roof racks and remove special carriers when not in use. It takes more fuel to accelerate a heavier car, and the reduction in fuel economy is greater for small cars than for larger models.
Minimize your use of air conditioning. Even at highway speeds, open windows have less effect of fuel economy than the engine power required to operate the air conditioning compressor.
In hot weather, park in the shade or use a windshield sunscreen to lessen heat buildup inside the car. This reduces the need for air conditioning (and thus fuel) to cool down the car.
Market optimism that crude demand will recover, despite an uptick in coronavirus infection rates, helped to lift prices last week. Prices could continue to climb this week if the market remains optimistic as vaccines continue to rollout. Additionally, prices increased after the Energy Information Administration’s (EIA) latest weekly report revealed that total domestic crude oil inventory dropped by 8 million bbl to 485.1 million bbl. If EIA’s next report shows another decrease in total domestic crude supply, crude prices could climb further this week.

For updated state and metro prices log on to https://gasprices.aaa.com/
Motorists can find current gas prices along their route with the free AAA Mobile app for iPhone, iPad and Android. The app can also be used to map a route, find discounts, book a hotel and access AAA roadside assistance.