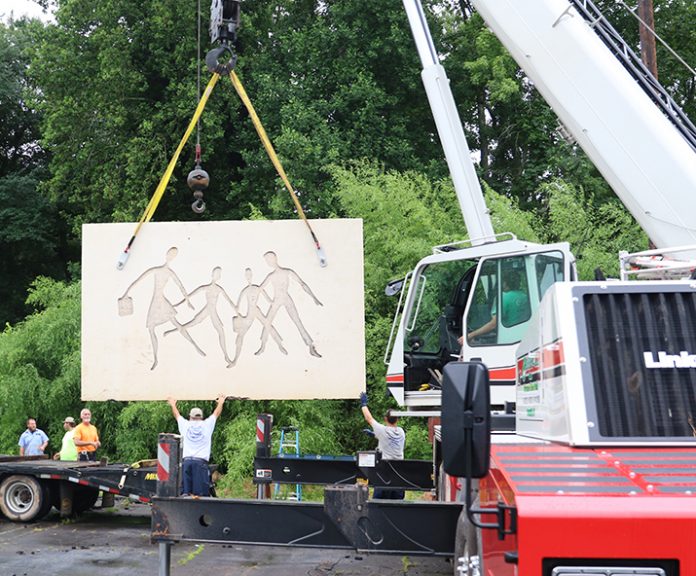 The Palmetto High “Wall Mural” now has a new home in Williamston’s Mineral Spring Park. The mural was a key feature of the entrance to the school when it was constructed in 1953 as Palmetto High School. The building, which has served as Palmetto Middle School since 1976, has recently been in the final phase of being torn down and replaced with almost all new construction. The mural has been in question since demolition and construction began on the new school.

Williamston Mayor Rockey Burgess and Anderson School District One Superintendent Robbie Binnicker came up with a solution. The “wall mural” will become the center piece for a concrete block wall along the back side of the town’s current tennis court area. A new wall will be constructed to help block the railroad and provide a back stop for what Burgess said he hopes will be a “pickleball” court.

The mural features four “figures” and is referred to by some as the “Alien Mural” due to the resemblance of the design to popular portrayals of “aliens.” It is 14’ tall, 9’ wide, 8” thick and weighs approximately 14,000 lbs.

“Town employees did a phenomenal job of rigging and assisting in loading and placement of the structure in the park,” Mayor Rockey Burgess said. “The police department assisted in clearing the roadway for the 14’ wide structure to make its way to the park.”

Local company Autech did much of the prep work including boring of the structure for supports at no expense to the town. Anderson School District One agreed to pay for the concrete for the footing.

Steve Burgess fabricated steel supports for the structure, installed the supports as well as fabricated temporary pins to lift the structure. Burgess donated his labor, use of gooseneck trailer and expertise and will only bill the town for material/steel in the amount of $650.

Campbell Crane Service was contracted by the town to help with the location at going rates, expected to be around $1000.

Burgess said he expect total expense to the town to be approximately $2000.

The town plans to construct a 144 ft. of concrete block walls on either side of the mural which will separate the park area from the railroad tracks at the back. The project is currently being bid and is expected to be approximately $15,000.

“It will be functional and seen every day,” Mayor Burgess said. “We will preserve history and a functional piece of artwork.” Burgess said other murals may be painted on the adjoining concrete wall when it is completed. The Palmetto High “Wall Mural” that was saved from demolition at the old Palmetto Middle School is now in Williamston’s Mineral Spring Park. The “Wall Mural” is 14’ tall, 9’ wide, 8” thick and weighs approximately 14,000 lbs. Campbell Crane was brought in to help with the re-location. (Photo by Mike Gowan)