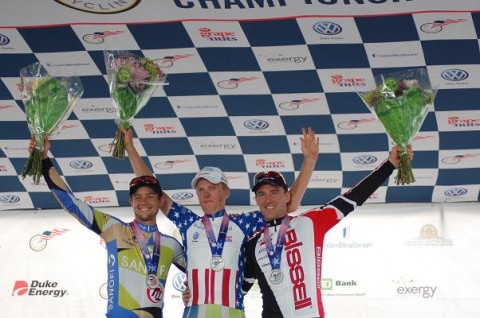 Despite being one of a two-man team, Timmy Duggan (Boulder, Colo./Liquigas-Cannondale) rode away with the victory in the 2012 Greenville Hospital System USA Cycling Professional Road National Championship presented by TD Bank in Greenville,  Monday afternoon.

Tyler Wren (Salt Lake City, Utah/Jamis-Sutter Home), who finished sixth in the general classification, won each of the first three sprints to the top of Paris Mountain to total 30 points and win the Volkswagen King of the Mountain.

Duggan rode in the lead group for the vast majority of the 112.4-mile race through downtown Greenville and up Paris Mountain before pulling away and winning by 26 seconds. K. Frank Pipp (Boulder, Colo./Bissell Pro Cycling) and Kiel Reijnen (Boulder, Colo./Team Type 1-Sanofi) took the top two spots in a bunch sprint to earn the silver and bronze medals.

“It’s incredible,” Duggan said. “It (wearing the Stars-and-Stripes) hasn’t hit me yet. The way this race played out, I’ve been thinking about it for a long time. I don’t have a mean sprint on me, I have to do everything right to go solo and win a race like this – a race everyone wants to win. It feels good to play the tactics right and make it happen.”

As the peloton left the opening set of three downtown circuits, a group of 30 riders, including Duggan, broke away from the field and built a lead of two minutes and 10 seconds as they approached the first of four climbs of Paris Mountain. With most of the teams represented in the breakaway, there was reason to believe the move might stick. As the riders made their first of four ascensions of Paris Mountain, certain riders made their desire to accumulate King of the Mountain points more obvious as they attacked close to sprint line. Wren collected the lion’s share of the points before re-joining the lead group during the descent. Robert Sweeting (Danbury, Conn./Kenda 5 Hour Energy Cycling Team) earned the seven points awarded to the second-place rider.

The lead group’s margin approached four minutes as they neared Paris Mountain for the second time. As was the case the first time, Wren topped Sweeting in the King of the Mountain sprint to garner 10 more points. A group of 38 riders formed at the front of the peloton pointed at narrowing the margin of the breakaway.

With Tom Peterson (Renton, Wash./Garmin-Barracuda) driving the lead group, it managed to hold off the hard-charging chase group as they turned into the third climb of Paris Mountain. The chase group, however, had narrowed the lead to under a minute at the descent.

Duggan attacked after the descent and quickly opened a 20-second lead as the race made its way to downtown Greenville for three more city circuits. He tacked time onto his advantage on the second of three laps, but van Garderen attacked with one lap remaining. Duggan used a steady pedal stroke, getting out of his saddle as he came out of turns to hold off the 23-year-old van Garderen, who finished second in Saturday’s time trial, and cruise to victory, leaving the chase group to fight for second.

“Normally, I might be disappointed with second, but I had nothing to do with Timmy going away,” Pipp said. “He obviously had an amazing day. Bissell is quite happy with second in the national championships.”

Wren won each of the first three Volkswagen King of the Mountain sprints to collect 30 points in that competition. His closest competition in that classification, Danielson, was 14 points behind him.

“It was our goal coming into this, to get me into this KOM jersey,” Wren said. “When I saw the race was having this Volkswagen KOM, Jamis-Sutter Home really wanted to make that a priority. I knew I had good legs. It’s always a roll of the dice to go into an early move. It’s fine. Sometimes, it pays off. I knew I had good form, so I wanted to use it somehow.”

View the full list of registered riders on the event’s official information page. Fans are also encouraged to visit www.usacyclingchampionships.com for more race news and events, and can also follow the event on Facebook at www.facebook.com/usacyclingchampionships and Twitter at twitter.com/USAProCycling. Please find daily recaps, course maps, results, videos and a photo gallery from Greenville on www.usacycling.org.

“Wearing the Stars-and-Stripes does not get old,” Zabriskie said. “The last few years I’ve brought it with me, even though I know I can’t wear my Stars-and-Stripes on this day, but I hang it up in my room to remind myself how much I like it and how people want to take it away from me. I enjoy wearing it.”

Zabriskie was the last rider to start the course, but he didn’t waste any time making noise. Each of his three laps were the fastest of the day, including completing his first lap in 13:18, unseating van Garderen’s mark of 13:23 as the fastest of the day. The 23-year-old van Garderen was the 16th of 35 riders out of the starting gate and his final time of 40:47.90 stood as the fastest until Zabriskie bumped him from the top spot.

“It was a good ride,” van Garderen said. “I look back and I left everything on the course. I can’t say that I have any regrets. Six seconds is a tough pill to swallow. It would have been easier to be second place by 40 seconds because then you know that there’s nothing you could have done. When it’s six seconds, that’s when you look back and you’re like, ‘Could I have gone a little better there or taken a corner different?’ What’s done is done.”

King of the Mountain