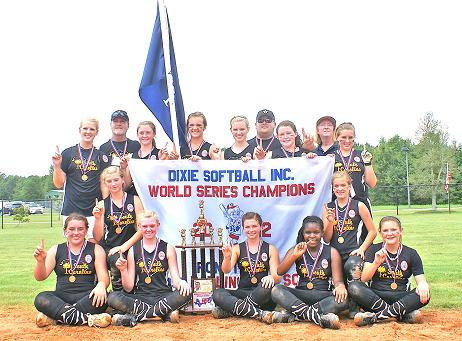 The cheers that could be heard all the way from Hartsville South Carolina up to the Starr – Iva communities last week also spread across the county to the Cheddar community after the Starr Iva recreation departments combined 12U fast pitch all-star team defeated Georgia on Aug. 4 to become the 2012 Dixie Youth Ponytails World Champions.

Neil and Sheila Garren and Sammy and Anne Ellison of the Cheddar community were among the local residents who celebrated the win. Their grand-daughter, Ellison Garren was one of the 12 and under softball team members who participated in the win. Ellison is the daughter of Ricky and Angie Ellison Garren of Iva, formerly of the Cheddar Community.

The Starr – Iva All-Star 12U girls fast pitch softball team won the Dixie Youth Ponytails World Championship by defeating Georgia 11-1 in three and a half innings due to the run rule.

The Starr – Iva team was the cream of the crop out of the eight other state champions and host team Darlington County.

Starr – Iva, representing South Carolina, outscored their opponents 46-4 and went undefeated in the five games they played during the five day tournament.

The championship win is the first time a South Carolina team has won the Richard T. Murphy, Sr. Dixie Ponytails Championship Award in its twenty five year history, according to the Dixie Youth website.

Coach Nakia Davis said the win was because of the dedication of the players, who practiced three times a week at Crescent’s softball field but also dedication from the parents to get them to practice and the tournament games along with the community supporting the teams fundraisers to help raise money to offset some of the cost of participating in the tournaments.

“We couldn’t have done it without everyone’s support,” said Davis.

Davis said that on the four hour trip back to home, people were on their phones spreading the word and making quick arraignments to have a police escort for the team as they came into Iva.

When they arrived, many people were gatherd downtown to congratulate them and get a look at the championship trophy.