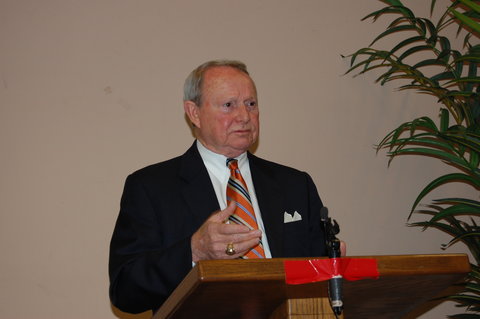 By Stan Welch – A crowd of approximately sixty people gathered at the Williamston Municipal Center Friday to honor Senator Billy O’Dell. The crowd included elected officials from the state, county, and municipal levels, as well as private citizens. Senator O’Dell is the longest serving Senator in the history of the historic Pendleton District, a political and geographical district from which several Upstate counties were formed.

Sen. O’Dell was first elected to the Senate in 1989 and is running unopposed in November after defeating political newcomer Riley Harvell in the Republican primary.

Mayor Carthel Crout presented the Senator with a resolution declaring the day to be Senator O’Dell Day in Williamston. “The Senator is more than just a politician. He is a statesman and there aren’t many of those left anymore.”

Gambrell read a long list of accomplishments and awards given to O’Dell over the years, including multiple “Legislator of the Year” Awards from various small business groups, and honorary degrees.

Gambrell also said that O’Dell’s honesty is greatly valued by those who know him. “If I ask Billy about a certain idea or approach to a bill, if he thinks it’s a bad idea, he’ll tell you. He’ll also tell you why and help you find a better way to go about it. That’s one reason he is so respected in Columbia.”

State Rep. Anne Thayer chided the Senator by saying she was born the year he entered the Senate drawing loud laughter from O’Dell and the crowd. “No, really, it was the year I started school,” she amended.

She too credited his experience and candor with making her transition to the legislature easier.

County Councilwoman Cindy Wilson recalled how Senator O’Dell came to the rescue when she first came on Council. “We put in a lot of water lines in this part of Anderson County, and Senator O’Dell was key in bringing local, state and federal people together. He pulled the different elements together.”

Mayor Lollis Meyers of Honea Path agreed with the statesman designation, but took it one step further. “Senator Billy O’Dell is a true public servant. He doesn’t get Broad River fever when he goes to Columbia. He remembers the people who elected him.”

Susan Aiken, representing U.S. Senator Jim DeMint, said that O’Dell’s reputation for constituent service rivals the legendary Sen. Strom Thurmond. “It means a great deal to know that when Senator DeMint gets a call about something that is really a state issue, Senator O’Dell will answer the call.”

Senator O’Dell spoke briefly, saying that the honor bestowed on him was one of the greatest of his career. “To have the people that you have tried so hard to serve tell you that you succeeded is the greatest honor of all. Except for the honor my wife Gail gave me when she agreed to marry me 47 years ago.”

O’Dell made several comments decrying the increasing partisanship in all levels of government. “I’m a moderate and I make no apology for that. I don’t expect to always get my way. Only children think that way. The art of compromise is dying and it serves no one to see it die. Insisting on being right usually results in nothing getting done for the people we are supposed to serve.”