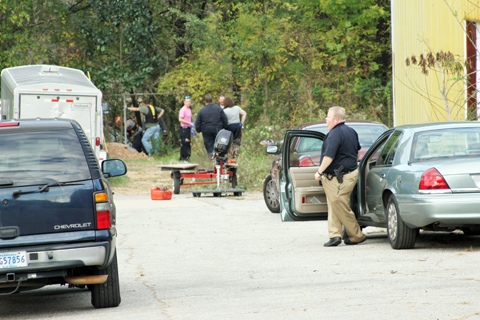 An investigator with the Anderson County Sheriff’s Office arrives on the scene after a body was discovered in the Saluda River Sunday afternoon. The body of Anna J. Mosley, 23, of Piedmont was found in the river  just below the dam and near Prospect St. and Iler St. in Piedmont.

According to reports, deputies responding to a report of a missing person on Iler St. around 2 p.m. were flagged down by Mosley’s uncle who told them he had found a body in the river. Members of the Anderson Technical Rescue Team, the Anderson County Dive Team and Pelzer EMS responded to the call. The body was recovered around 6 p.m. in standing water 3 feet to 4 feet deep according to Anderson County Deputy Coroner Don McCown. McCown said Mosley had been missing for about four days. An autopsy was schedule for Monday to determine the cause of death.