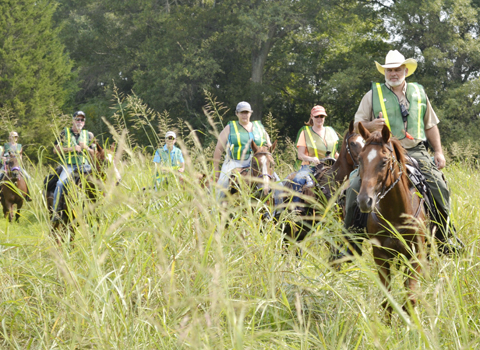 The Anderson County Sheriff’s Office Community Emergency Response Team (CERT) and the Volunteer Mounted Search and Rescue Team (MSaR) participated in a mock search and rescue on Sunday at the intersection of Willingham Road and Bell Road in the Cheddar community.

Thirty volunteers from both teams arrived on location at approximately 2:30 pm Sunday after receiving an emergency call-out for three missing persons. A command tent was set up where volunteers checked in and received their instructions and an update on the missing persons.

CERT members have assisted Williamston city with events such as the Party in the Park and the Spring Water Festival in the past. This drill highlighted the quick response, skills and organizational integrity of the teams in the event there were ever a missing person in the Williamston area.

During the exercise, the MSaR and CERT members were given instructions and commenced the search. The “victims” were found in approximately one hour.

CERT members were on hand to assess the “victims” health conditions upon arrival back to the Command Post. Despite the 90 degree weather and being “lost” in the woods, the “victims” reported to be in good health.