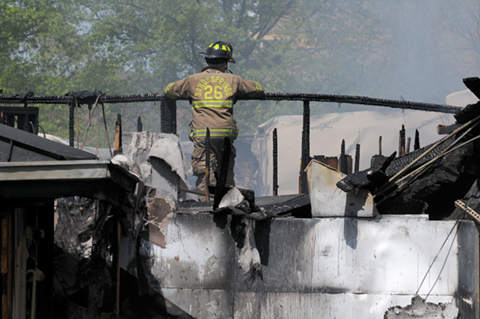 A Sandy Springs Firefighter surveys the damage and looks for hot spots at J Peters Bar and Grill on Interstate Boulevard in Anderson after the restaurant caught on fire Easter Sunday morning around 8 a.m. Over 60 firefighters from three stations responded to the fire. Firefighters from Centerville, Sandy Springs, and Zion responded. Two ladder trucks were used to fight the fire. According to reports, the fire may have been started by a  cigarette discarded into a mulch bed outside the restaurant the night before.(Photo by Michael Lollis)