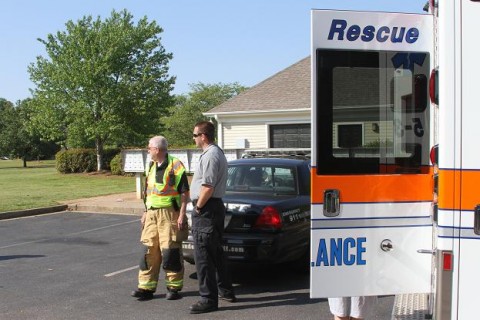 Powdersville firefighter Rick Owings (l) and Pelzer EMS paramedic Kevin Adams search for the parents of a three year old. She was found wandering in a large Powdersville apartment complex Sunday morning by someone walking their dog. She sat patiently on a stretcher inside the ambulance. Deputies, paramedics, and firefighters went door to door in an attempt to locate her parents. The toddler was reunited with her grandmother after the grandmother realized she was missing. This was about an hour and a half after the toddler was found. The three year old’s mothers had dropped her off at the grandmothers earlier in the day. (Photo by David Rogers)