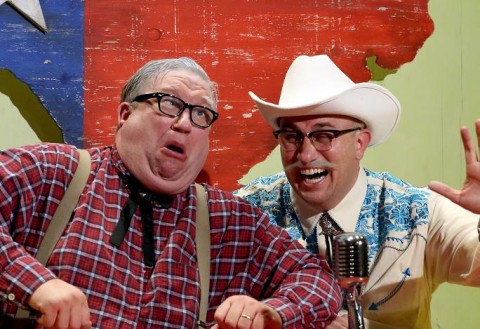 The Mill Town Players will present Greater Tuna which runs Thursdays through Saturdays at 7:30pm and Sundays at 3pm through June 12. The production is part of the Anderson Theatre Festival and will be performed in the Historic Pelzer Auditorium at 214 Lebby Street, Pelzer. Greater Tuna is the hilarious comedy about Texas’ third smallest town, where the Lions Club is too liberal and Patsy Cline never dies.

The eclectic band of citizens that make up this town are portrayed by only two performers, making the satire on life in rural America even more delightful as they depict all of the inhabitants of Tuna — men, women, children and animals.

Greater Tuna is directed by Jay Briggs, scenic and costume design by Ryan Bradburn, lighting design by Tony Penna, and will feature Upstate stage veterans Will Ragland and Shane Willimon who will play all 20 ridiculous characters.

Tickets are only $10 with discounts for seniors, military and students at the door or online at www.milltownplayers.org.