The West Pelzer Police Department has joined a number of much larger law enforcement agencies in being trained and qualified to administer naloxone, an antidote to opiate overdoses.

Scott Stoller, with Anderson County’s EMS and special operations division, who also works with the WPPD on a limited basis, is one of the state’s relatively few certified training officers in the use of the drug. He has helped train such departments as both the Greenville city and county police forces, the Charleston department, as well as Columbia and the USC campus police force.

The drug, known commercially as Narcan, has been used by medical responders for many years to offset the effects of opioid overdoses and to restore more normal breathing in the patient. Its effects are short lived, last just a few minutes. But those few minutes can be crucial for someone waiting on EMS personnel to arrive, says Stoller.

“Once the medical personnel arrive, they have other, more effective resources at their disposal, but the Narcan can buy those few precious moments when the patient might otherwise not be breathing. Narcan is a narcotics antagonist. It replaces the opiate in the opiate receptor areas of the brain. The opiate, at overdose levels, begins to shut down the respiration. Narcan intercedes, sort of like a bulletproof vest, and replaces the opiates in those receptor areas, allowing respiration to continue, or resume.

“ I really commend the West Pelzer department for taking this on as another tool they can use in serving their community. Not all departments are as eager to step forward in these cases.”

The General Assembly paved the way for that involvement last year when they passed the Overdose Prevention Act of 2015. That act protects first responders from any criminal or civil liabilities as a result of their efforts to help overdose victims.

The drug is administered as a nasal mist, or injected through an epipen, such as those used by some diabetics. While many overdoses are heroin related, prescription opiates can also be a danger. Those include codeine, fentanyl, hydrocodone, and morphine. While hydrocodone is increasingly abused illegally, Stoller says that patients, especially older ones, or those in more severe pain, can unwittingly overdose.

WPPD Chief Mike Clardy said that Stoller’s ability to train the department, and his expertise in seeking grants to purchase the expensive Narcan, are real assets to the community. “This is just another avenue that allows us to serve the people in our community. Police response times are typically faster than other first responders, since we are already mounted up and generally moving through the community. So to be able to bring this tool along with us promises to be a big help in those overdose circumstances.” 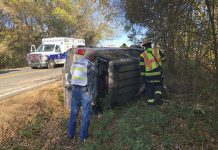