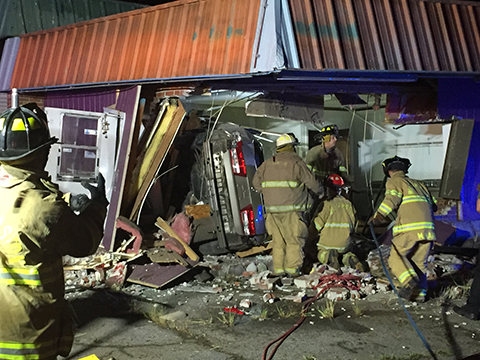 Williamston firefighters work to free two people from the wreckage of a car early Wednesday morning. The car was being pursued by Anderson County deputies through Williamston when it left the roadway and crashed into part of the car wash on East Main Street at Greenville Drive. Two people had to be cut free from the wreckage while another got out on his own. Medshore transported two to the hospital. (Photo by David Rogers) The SC Highway Patrol is investigating an incident in which the vehicle driven by a Williamston man crashed into a local carwash building causing considerable damage. The incident happend at 3:05 am Wednesday morning.

According to the SC Hwy. Patrol, the driver of the 2003 Honda Austin Mosley, 23,of Williamston was not wearing a seatbelt and was not injured. A passenger in the vehicle, Rosa Lyn Thurmond, 19, of Williamston, was wearing a seatbelt and was injured. Thurmond was trapped in the vehicle and had to be extracted. She was transported to AnMed by Medshore Ambulance. A second passenger in the vehicle, Wesley Sloan, 36, of Anderson, was also wearing a seatbelt and was injured. Sloan was entrapped and had to be extracted. He was also transported to AnMed. According to reports, Mosley was headed east on Main Street in Williamston when he ran off right side of road, hit guy wire, struck ditch and then struck the building. Mosley was charged with DUI and driving under suspension.Vehicle crashes into carwash