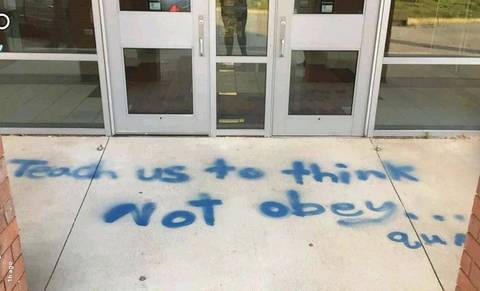 The Williamston Police Department is investigating a vandalism incident in which graffiti was spray painted on outside walls, sidewalk and doors at Palmetto High School and other nearby businesses on Hamilton Street.
According to Williamston Police Chief Tony Taylor, the incident in not gang related but appears to be anti-establishment and anti-God. Chief Taylor said the suspect is believed to be a student.
In addition to several places at the school, graffiti was spray painted on a bus at Palmetto High as well as Unity Mortuary and the Stop-n-Go located on Hamilton Street, approximately 1/4 mile from the school.
Police investigators do have video of the suspect, Taylor said.
Taylor said the incident is the first graffiti miscellaneous damage report the department has had in awhile.