Home Anderson County Cheddar community updated on Kinder Morgan spill, other issues
Facebook
Twitter
Pinterest
WhatsApp
During Town Hall meeting
By Stan Welch
A crowd of approximately thirty five residents of the Cheddar Community gathered Tuesday night for an update on the progress of the petroleum spill that continues to threaten Brown’s Creek, Broadway Lake and waters further downstream.
But before Frank Holleman, lead attorney for the Southern Environmental Law Center (SELC) on the case took the floor, county representative and grant writer Steve Newton spoke. He reported on efforts to obtain funding for the construction of a larger water trunk line; one large enough to deliver and sustain sufficient water pressure to allow for fire hydrants in the area of the gasoline tank farm which is located in the heart of the area.
He explained that approximately half of the million dollar project cost has been committed, but he added that the additional half million dollars is proving harder to find. He referred to a nascent plan that he chose to remain vague about, but said that the county was going to ‘shoot the moon’ in coming months in an effort to close the funding gap.
The crowd included a large contingent from the Cheddar Fire Department, as well as a smaller group from the Anderson Regional Landfill. There were also representatives from Upstate Forever and the Savannah Riverkeepers. District Seven Councilwoman Cindy Wilson introduced  Chris Cosker, the new site manager at the landfill. He explained that ongoing efforts to reduce strong methane odors at the site are continuing, but are being hampered by the heavy rains, which significantly increase the amount of leachate on the site. He anticipated a noticeable change in the next two weeks.
Frank Holleman then took the floor to review steps that have, and more importantly, have not been taken by Kinder Morgan, the owners of the Plantation Pipeline that was breached almost six years ago, spilling at least 370,000 gallons of gasoline and diesel fuel into the wetlands and creeks that lace the area. Holleman opined that a number of experts estimate that the spill might have been closer to a half million gallons.
But he saved his most righteous anger for both the pipeline’s owners and SCDHEC. His main complaint with the efforts of those two parties is that they are focused on monitoring and not aggressive cleanup. “They are studying the migration of the pollution plume when they should and could be removing it,” said Holleman. He spoke about some partial steps that have been taken, but added that they fail to address the pollution at its deepest point in the water table.
“That pollution is going to continue to rise to the surface and to migrate downstream. We need an aggressive pump and treat program. All these ancillary issues related to the spill would go away if the cleanup were done properly. It’s been five years since this spill was discovered. That’s more time than the United States spent in fighting WWII. It’s ridiculous.”
Holleman talked about a lawsuit that the SELC filed on behalf of several environmental groups; a suit which Anderson County later joined in. The lawsuit is currently before the United States Supreme Court. The issue, according to Holleman, centers on the location of the leak. The welded patch that failed was approximately a thousand feet uphill from the creek itself. That means that the pollution had to travel through soil and into the groundwater before reaching the stream.
Kinder Morgan argued that the federal Clean Water Act specifies that such a spill must occur in or directly above the polluted watercourse in order to place responsibility squarely on the source of the spill. SELC argued otherwise and won in the U.S. Court of Appeals. Kinder Morgan then appealed to the Supreme Court. Holleman said a ruling should be forthcoming by the end of June at the latest.
“But the point is that we never should have filed a lawsuit. DHEC can use their authority to require that the cleanup proceed, and proceed effectively. We really need for DHEC to step up and do the right thing for the people of the Cheddar community.”
Representatives from SCDHEC had been expected to attend Tuesday night’s meeting, but chose instead to meet with Wilson’s public works committee in a private meeting the previous week. 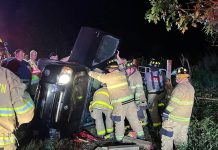