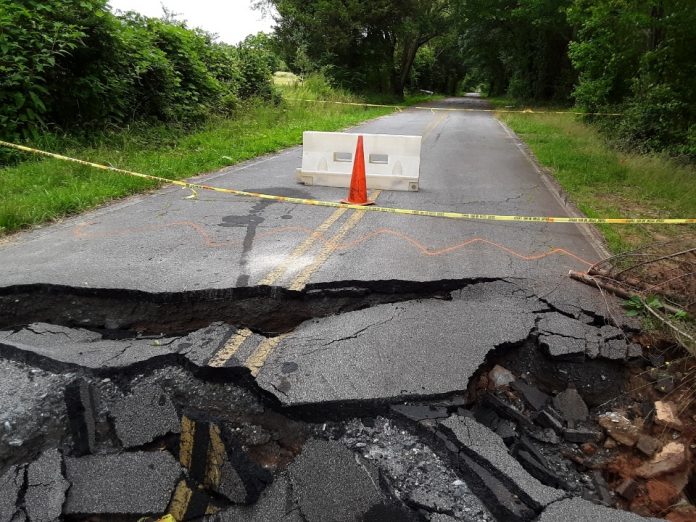 By Stan Welch
A breach in Paulan Road that resulted from the torrential rains earlier this spring has been moved up on the schedule for repairs, according to Anderson County Administrator Rusty Burns.

“We had scheduled that project for later this summer due to the relatively low traffic on the road; but people have repeatedly removed our barricades, and we recognize that the situation has become a matter of public safety.”

The project has been moved up and will begin in two to three weeks.

The breach, located just yards from the intersection of Philwood and Paulan roads, in the area behind the Frankische manufacturing facility on Highway 81, is the result of a stream that runs through that area. The corrugated metal conduit that is in place remains intact, but was simply unable to channel the amount of water it received following the heavy spring rains that washed out several roads and culverts in the county.

According to residents who live nearby, at least three accidents have resulted, although two of them might have involved intoxicated drivers. The most recent incident, however, occurred because someone had removed the warning barrier on the Hammond Road side of the breach A motorist came through in the darkness, and presumed the road had been repaired since the barrier was gone.

Those barriers have been replaced a number of times, but were driven around or moved. Tampering with or ignoring such barricades is a misdemeanor punishable by sizable fines.