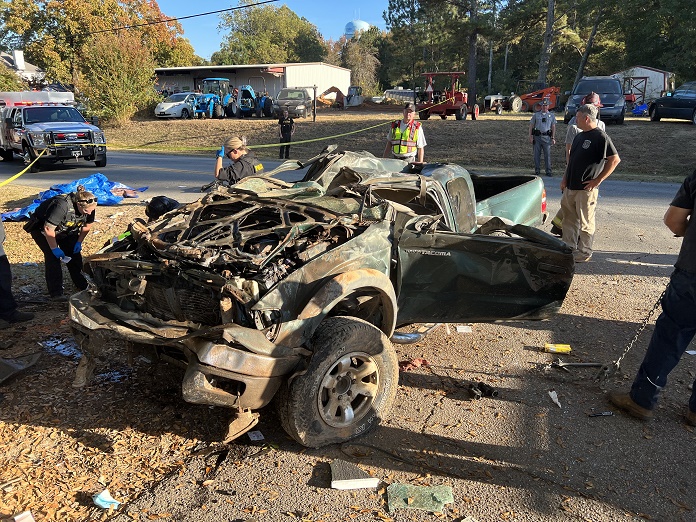 Emergency personnel work at the scene of a single vehicle accident Monday afternoon in which one person was killed and another injured. It happened on Anderson Drive near Walton Drive in Williamston. A pickup truck left the roadway and struck a mailbox before hitting a concrete culvert and utility pole. The driver was rushed to the hospital and a passenger was killed. Williamston and West Pelzer firefighters responded and had to extricate one person from the wreckage. State troopers and Williamston police officers also responded along with Medshore and a QRV. (Photo by David Rogers)

One person killed in fatal rollover on Anderson Drive

A single vehicle crash that occurred around 3:30 pm Monday on Anderson Drive in Williamston resulted in one person’s death and another person being critically injured.
Anderson County Deputy Coroner Ty Blackwell identified the deceased victim as Victoria Lynn Medlin, 53, of Williamston.
Medlin died as a result of multiple traumatic injuries secondary to blunt force trauma and was pronounced dead on the scene.
According to the coroner’s office, the investigation indicates that Medlin was a front seat passenger in a vehicle traveling on Anderson Drive at Walton Drive when the driver apparently lost control of the vehicle, traveled off the roadway and over-turned several times. She was restrained in the vehicle.
The driver of the vehicle sustained serious injuries and was transported to Prisma Health in Greenville.
The investigation is on-going by the Anderson County Office of the Coroner and the South Carolina Highway Patrol. Medshore EMS, Anderson County EMS, Anderson County Fire Department, South Carolina Highway Patrol and the Anderson County Office of the Coroner responded to the scene. Williamston and West Pelzer firefighters, Williamston Police, Medshore Ambulance and a QRV also responded.