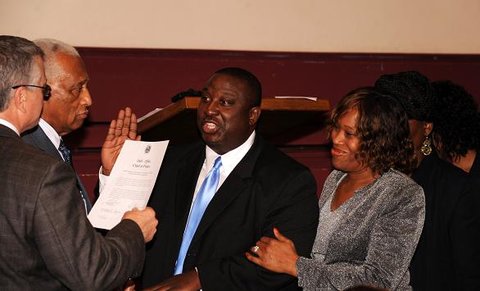 An overflow crowd of more than 250 people attended the first Council meeting of the year in Williamston, which began with the ceremonial swearing in and administering of the oath of office for the new mayor, council members, fire chief and the town’s new police chief.

Friends, family members and law enforcement coworkers joined citizens of Williamston in witnessing a history making event, the swearing in of Tony Taylor as the town’s new police chief. Taylor, 49 , is the first black in the history of Anderson County to serve as head of a municipal police department.

Taylor, who worked as a dispatcher for the Williamston Police Department in the early 1980s, worked with the neighboring departments during his career in law enforcement and also with the SC Criminal Justice Academy, where he trained police officers across the state.

“You don’t know what a quality person you have hired,” Chief Harrell said about Taylor. “We teach integrity. You have to do the right thing, not because it is politically correct.”

Harrell said Taylor will make the community safer and will be responsive.

“You have someone who will listen and try to help you resolve your problems. He’s going to give you the best law enforcement that the town of Williamston can afford.”

“I think he will do an excellent job,” Anderson said.

Captain James Stewart of the Anderson City Police Dept. said he had learned a lot from Taylor during training as a gang enforcement officer and that he is a man of character. “If there is a call day or night, he will answer.” He also said Taylor is “all about community partnerships.”

Williamston Fire Chief Steve Ellison was sworn in along with newly elected officers for the Fire Department.

Mayor R. Mack Durham said the “Level of professional quality of people we have. We have a fine bunch of men and women who are providing leadership services in the town of Williamston.”