The WPFD elected Chris Karr to its board; gave Curtis Mahaffey an appreciation award; recognized Daniel Brooks’ ten years of service; and recognized Jordan Smith for making the most runs. Connor Townsley and Jordan Smith were named firefighters of the year, and Seth Blackwell was named junior firefighter of the year.

The town’s audit is complete and should be available this week. Council was encouraged to make an appointment through town clerk Paula Payton to review the audit individually on February 8.The Tax Anticipation Note (TAN) is due to be paid off on February 28.

In old business, the Council unanimously gave final approval to an ordinance authorizing them to allow variances of the zoning ordinance related to mobile homes. Final approval was also given to the annexation of a property located at 128 Arthur Davis Circle. Councilman Jimmy Jeanes, who was reappointed to serve as mayor pro tem, opposed the annexation.

First reading approval was given to an amendment to the town ordinance on public intoxication. The amendment would include any and all mind altering substances, instead of just alcohol. The vote was unanimous.

Mayor Sanders informed the Council of several amendments to the computer and mobile phone policy in the town’s employee handbook and asked for their approval. Councilman Jimmy Jeanes moved to table the matter until the Council could study the changes. Mayor Sanders was opposed. The matter was tabled.

Sanders them presented the Council with a proposal to fund a four foot safety fence around the sewer plant. The Council unanimously approved the $1253 expense.

Councilman Johnny Rogers was asked to work with Chief Mike Clardy to determine the cost of replacing the police department’s out of date ballistic vests. 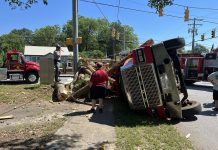