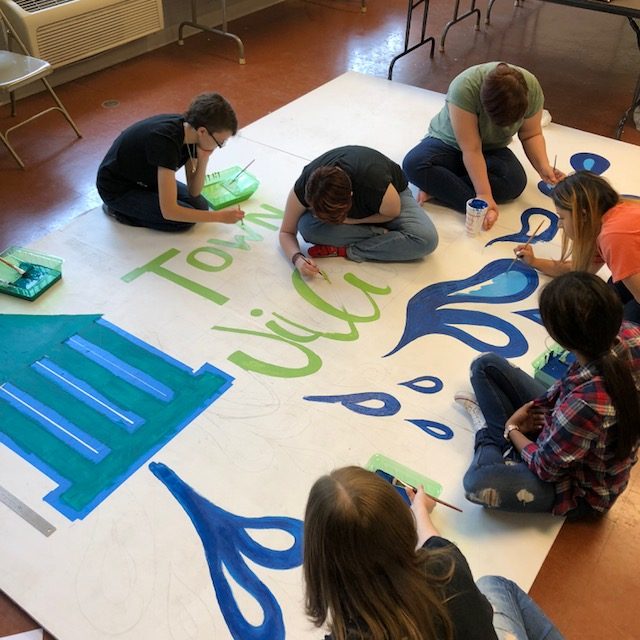 A Mural Paint Party was held recently to begin work on murals that will be placed in three different locations in Williamston. Palmetto High Art Teacher Gregg Davis and a team of art students are working on the project, which is sponsored by Envision Williamston.
Art students participating in the mural project include: Skylar Emanuele, Ashton Reason, Christina Cortez, Alyssa Clark, Maria Carrillo and Bella Salyers.
Davis and Envision Williamston Executive Director Sonya Crandall were there pitching in but the students did most of the artwork. “They were quite meticulous and dedicated to their work,” Crandall said. “We painted from 11 am until about 2:30 pm on Saturday (May 12) and followed with a pizza lunch in Mineral Spring Park.”
Crandall said touch-up work was done this week on the first mural and then an anti-graffiti coating will be placed on them. A frame will be constructed and the mural will be placed on a building. The mural measures 8′ high x 12′ across and is being prepared in advance. The design artist for the mural is Rebecca Vaughn and the name of the mural is “Modern Spring.”
Prep work has already begun on a building located next to the Williamston Fire Department on which the first mural will be placed. “We hope to have an unveiling for the mural early next month,” Crandall said.
The contest winners are: Heather Dowell for her design of “Mineral Waters: Then and Now”; J. Thomas Addison for his design of “Unbroken Chain of Mineral Spring Water” and Rebecca Vaughn for her design of “Modern Spring.”
The beautification project is also attracting interest from the community. A mural was recently painted on the Goody’s building at Town Square Center. The mural was privately funded. Palmetto High art students lend their talents to work on the first of three murals that will be seen in Williamston soon. The students, under the direction of Palmetto High Art Teacher Gregg Davis, are painting the designs chosen in a mural contest held recently. The mural project is sponsored by Envision Williamston.