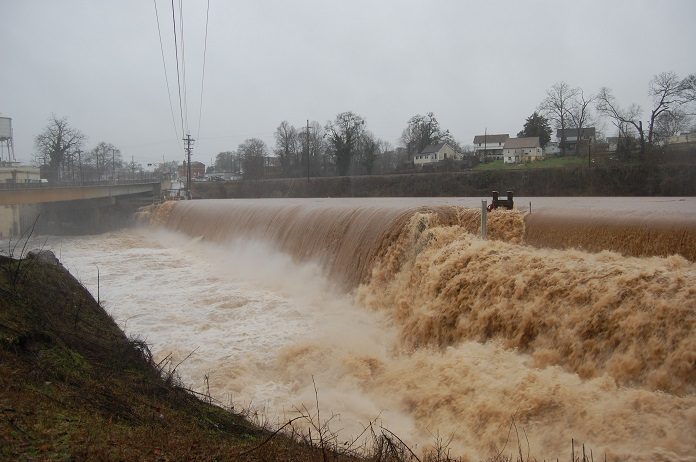 Heavy rains and subsequent flooding in the northern Anderson County area led to concerns about the possibility of evacuation downstream from the various Saluda River dams in the region. Those concerns led to rumors, rumors which Anderson County Emergency Management Director David Baker quickly squelched in a telephone conversation with The Journal Thursday afternoon.
Baker explained that the dam operators engage a high flow protocol when the waters behind the dam reach a certain level. That protocol involves the release of additional volume through the dams’ flood gates systems, releasing the pressure on the dams. ‘Whenever that protocol is activated, emergency management and sheriff’s office personnel notify all downstream residents, so that they do not worry unnecessarily.
“We explain what is happening and assure them that no evacuation order has been issued. However, we always acknowledge the worst case scenario, and suggest that if they have somewhere else to stay until the storm passes and the situation eases, it makes sense to go there while travel is easier.”
That was the situation today, although Baker conceded that the notification process might lead to rumors of evacuations.
Aside from the circumstances around the dams, there was significant flooding in the area, with a number of roads being underwater and unsafe for travel. At least one resident drove into deeper water than he should have. He was last seen standing on the roof of his truck, calling for assistance. The Shackleburg Road bridge washed out entirely, breaching the road and making it impassable. Baker said that was the most significant damage suffered in the county.